I went jetskiing this afternoon, like I usually do on most summer weekends. Ive been to this lake probably close to a 1000 times. No exageration. But this trip, I happen to be lucky enough to be in the right place, at the right time and catch a glimpse of something I did not think exsisted or even could exist in this lake. A freshwater stingray! Jimmy and I were pulling our jetski's up onto the shore and preparing to go get our vehicles, to pull out and leave for the day. I was walking thru water about 8 inches deep when something caught my eye just in front of my feet. I took another look and saw what clearly appeared to be a small brown stingray swimming quickly from rock to rock along the bottom. I bent down to have a closer look. He was about 4 inches long, nose to the tip of his thin tail. He was dark brown with small light brown splotches on his back which really helped him blend into the bottom of the lake bed. When he swam, he glided along the bottem effortlessly and didnt really seem scared. Just botherd that I was moving in his direction. He came to a stop just in front of me so when I bent down to look at him closer, I reached into the water and used my index finger to gently stroke his back. He was smooth, almost like a salomanders skin. At first I was very surprised he sat so still for me. Then right as I thought that, zoom.... gone into the deep. My buddy Jimmy got to my location right as this happened. I told him what I saw and he was just as amazed as I was. I came home and searched the internet for anything on freshwater stingrays in local lakes. But found nothing. I know a few people that are familiar with the wildlife in the area. Im going to ask them if they've ever seen or heard of them. Very facinating... indeed!
Posted by Thorpeland at 8/27/2005 04:07:00 PM No comments:

I forgot to post about my trip last weekend. Emily and I jumped on a plane and flew down to Galveston Texas to visit our friends Mike and Cheryl. We had a great time going to the beach, seeing the sites and eating out. We took the ferry across the harbor to an island. We stayed on the ferry because we didnt really go to see the island, just to ride the ferry and see the dolphins jump along side the boat. They didnt come as close as I had hoped they would. My camera was ready! We also got to check out the Moody Gardens Aquarium. This was a pretty neat place and I was totally surprised such a large park was located on the small Galveston Island. On Saturday morning, Mike and I had some time to kill while the girls went out looking at wedding dresses for Cheryl. (Her and Mike are getting married next May) So Mikey and I headed down to the historic district of town and found the Gavleston Hurricane Museum. Now, the term "Museum" turned out to be a bit misleading. It should have been called a gift shop. There were no historical artifacts, exhibits or relics from the massive hurricane that destroyed the island in 1900. Although they did have a short movie in a little theater you could watch that told all about what happened in that storm. So Mike and I decided to stay and watch that. It was very interesting because the story was told by the nararrators reading old diaries and personal accounts of the storm. It was much better to hear it in the words of the people who lived thru it. That hurricane killed 6000 people and leveled almost every building on the island! Later that night we met up with some of Mike and Cheryls local friends. We all headed down to the beach. The moon was so bright it lit the ocean up! You could pretty much see everything because of the full moon. We could see the faint flickering lights of oil drilling platforms and oil tankers on the oceans horizon.
It was a great trip and on Sunday August 21st I realized Emily and I have been together for a year and 3 months! Wow, time just fly's! She's the greatest girlfriend I could ask for. No insane mood swings or any other defects which i've had to put up with in past relationships. Things with her are just fun and simple. Im lucky to have her. :)
Posted by Thorpeland at 8/26/2005 10:35:00 AM No comments: 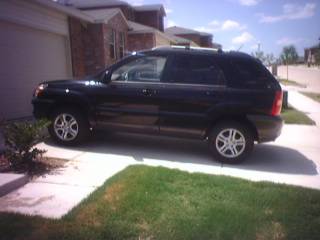 After a couple weeks of not updating my blog, im back. And im back with actual news! About a week and a half ago, I got rid of the old Saturn I'd been driving since 2000. Im now driving a 2005 Kia Sportage EX! Its black, with power everything and has leather interior. Very sharp! Ive put a link below to the vehicle specs. So far, im very impressed with this little SUV. Lots of features for a very nice price. I'll post a pic of me and the new ride soon.
http://autos.yahoo.com/newcars/kia_sportage_exv62wd_2005/16638/style_overview.html
Posted by Thorpeland at 8/17/2005 01:01:00 PM No comments: