Last night was the season opener for my Thursday night soccer team. Our first game and we had picked up some new players which gave me higher hopes for a successful season. Most of all, we had a new goalie who looked like he knew what he was doing. Thats always reassuring!

From the opening kickoff, we were looking good. We controlled the ball and held posession almost the entire match. Our defense still needs a little work. Despite barely turning over the ball most the first half, we went down 3-1 by half time. But this team didn't fold and give up. We fought back and managed to even the score 3-3 with 5 minutes left in the game. We threw everyone into attack mode in the final minute and almost scored a game winner on several shots. The final buzzer sounded with the game tied 3-3. Not too bad for our first game. And, not a bad performance for myself. I scored our first goal and third goal of the match. It felt good to find the back of the net again after a short goal droute. I hope we can keep up this level of play next week!
Posted by Thorpeland at 5/27/2005 09:07:00 AM No comments:

I gotta say, my lawn kicks butt! Now, a year ago, I would have laughed a good 10 minutes straight at anyone who took pride in how their lawn looked. But now that I have one, it really is rewarding to look out the window and see a lush, green freshly mowed lawn. And Ive done it with such little effort. A little fertilizer one weekend, a bit of water a couple times a week and bam! A green lawn. Although, a couple times while I was doing the final edging around the driveway, I had to stop and ask myself.... who am I?? Definatly not the same Thorpe. Oh well. Home owner Thorpe is enjoying working on a lawn. Who'da thunk it?
Posted by Thorpeland at 5/22/2005 10:26:00 PM No comments:

I just found out the other day that one of my favorite games, Ghost Recon, has announced a 3rd edition to the GR series. This is great news since the original GR came out in 2001 and GR2 was passed up for the PC and only released for sucky consoles. With leaps and bounds made in video gaming technology, GR3 should be quite impressive. As of now, the are predicting a holiday 2005 release. I sure hope it doesnt get pushed back! For those that dont know anything about Ghost Recon, its a tactical first person shooter type game which takes place in hot spots around the world. The Ghosts are a group of special forces US soldiers who use the latest in technology to combat their enemies. Very intense games!
Posted by Thorpeland at 5/19/2005 04:17:00 PM No comments:

Its hard to believe i've now been in my house for almost a month and a half already! In such a short time ive accomplished a lot of my small goals I set when moving in. Ive installed a ceiling fan in the living room. Ive bought a new large computer desk for the office room, so I can now have space to work and repair PC's. Ive installed a motion detecting light on my front porch. Ive set up a wireless network inside for all my computers. So much done but the list keeps growing.

I actually had to mow my lawn for the first time last weekend. A week later, its grown back up and time to mow again. Thats good though because for quite sometime it was looking pretty dead. After spreading some fertilizer and watering regularly, it really came to life! I have a respectable lawn now. :)

Oh! Big news! Two weeks ago, I entered a local photography contest. Photo's had to be taken in my city within the past year. After the deadline passed and the photo's were judged, I won 1st place in the Nature catagory. Woo Whooo! My first accomplishment in photography. It was small but I thought it was pretty darn cool. Just another reason I bought the Canon Digital Rebel... great looking photo's!
Posted by Thorpeland at 5/14/2005 09:41:00 PM 1 comment: 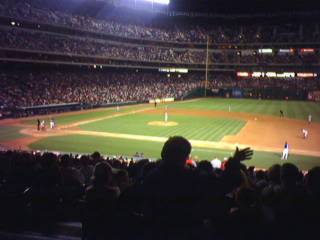 A Night at the Ballpark

Saturday night Emily and I took in the Rangers vs. Boston Red Sox game over at the ballpark. It was a great time, even though Boston spanked the Ranges 9-2. We had great seats, as you can see in the picture. I wish I had brought my Canon Digital Rebel. But the camera phone had to suffice. Either way, another fun night out with Emily. :)
Posted by Thorpeland at 5/02/2005 10:30:00 AM No comments: