Into the Desert with the DCPT Gang! 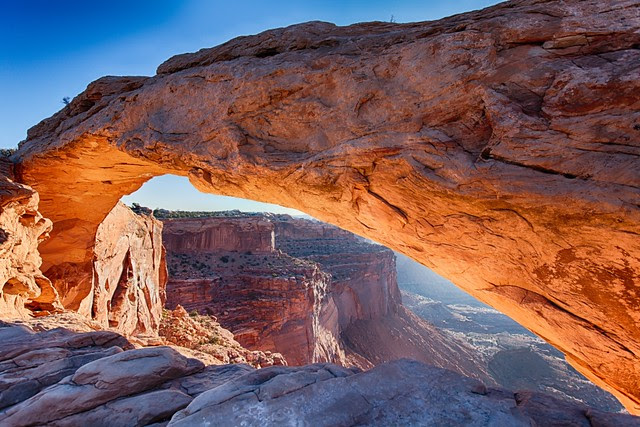 Back in late 2011 I ventured to Jackson Hole Wyoming with a photography tour group called Dirt Cheap Photo Tours (http://dirtcheapphototours.com), led by owner Jeff Clow.  It was an amazing trip and I returned with a ton of awesome photos.  I knew I wanted to go on another tour, but I wasn't sure exactly where yet.

Then last fall I received an email from Jeff informing me he was adding a new destination to his tours.  The Spring of 2013 DCPT's would be heading to Moab Utah and the surrounding National Parks.  I replied to his email within seconds to let him know I was IN!  He added me to the tour group list and gave me all the needed information.  The price had gone up a bit since Jackson Hole.  The tour now costs $600, up from $500 in 2011.  Perhaps inflation?  Or just the cost differences of the location.  Either way it was still a great value.  You see, if I was planning this trip on my own... I would have to research exactly where to go, how to get there, where to stay, rent a car and drive myself around.  Could I do all that?  Sure.  But it's much easier when you're with a group.  But Jeff makes it even easier.  He rents the cars, finds a good hotel for you to reserve a room at and drives you around each day.  Leave your maps and GPS at home... Jeff has it covered.  All you have to do is concentrate on shooting.  All day... each day.

So, lets start with getting there.  There are three ways you can get to Moab Utah.  Option one:  Catch a United flight into Denver, then a puddle jumper into Moab.  This is what I did.  We flew from Denver to Moab in a Beechcraft 1900 twin-engine, which I referred to as "the twin-engine lawn mower".  It was a fun experience.  You get a better view of the mountains below because the aircraft fly's at a lower altitude.  Turbulence wasn't bad at all and the flight takes about 1 hour and 30 minutes.  Now, if you go this route you'll find out the Moab airport is TINY.  And there are no taxi's or shuttles waiting outside for arriving tourists.  So be sure to call ahead and arrange your ride.  There are shuttle services which will pick you up.  But you have to schedule them.  We didn't know this and had to hang out in the "airport" for about an hour for them to find the right sized van to come get the 6 of us.  Anyhow, Option two: Fly into Grand Junction Colorado and rent a car.  Then drive the 90 minutes to Moab.  And option three: Load up your own car and make the road trip.  The latter seems to be the least attractive to me.  I just want to get there, shoot and get home.

My buddy Stephen Masker and I flew in the evening before the tour actually started.  Jeff's tour was to start on a Thursday evening and end the following Sunday afternoon.  We arrived on Wednesday night to get settled and explore Moab a bit.  We checked into the Moab Valley Inn and got settled.  There are not a lot of daily flights into Moab so if we had waited to fly in on Thursday, we would have arrived just a couple hours before the tour started.  I wanted to be fresh and ready to go, so Wednesday it was.  Thursday evening rolled around and the group met Jeff and each other in the lobby of the hotel.  From that point forward it's a whirlwind.  We loaded up the car with our gear and headed out for  a couple hours of evening shooting.

On this particular DCPT, we managed to hit 28 photo stops.  Spread that out over 3 1/2 days and that's a lot of time behind the camera.  Each stop is pretty much the same system.  Jeff talks about the up coming destination while driving.  Once we arrive, Jeff announces how long we have to shoot.  Usually it's somewhere between 45 minutes to an 1-1/2  hours.  Plenty of time to find the best shots.  Then, everyone gets out of the car and spreads out around the location finding their best photo opportunities.  Of course there's usually one or two "must have" views or rock formations everyone will shoot.  But after that, it's up to your imagination.

I do need to give one warning about the parks around Moab, which I didn't have to give about my trip to Jackson Hole.  It occurred to me on several occasions this is one vacation that I could actually DIE during.  You see, Moab is full of sheer cliffs and valleys.  They DO NOT put guard rails up at the edges.  So you really must use extreme caution while trying to get "the shot".  Because if you're not careful and you fall, it won't be a rescue mission, only a body recovery mission.  Those cliffs are 500 feet straight down.  No joke.  Now, don't let that scare you from going.  It's your choice how close you want to get to the edge.  Jeff doesn't force the tour group right to the edge at any time.  I made my own decisions to move my camera and tripod to within 2 feet of the abyss.  So... just be careful.

The shoot schedule for the tour can be a bit grueling.  Each day Stephen and I were up by 5:30am, eating breakfast by 6am and in the car with the group by 6:30am.  We arrive at our first location before sunrise and shoot all day till late afternoon, only stopping a couple hours for lunch.  It is exhausting.  But you'll come home with some amazing photos.  I ended up shooting somewhere around 900 photos.  I was a bit more selective in my shots that my previous tour.  And I was able to pack lighter than I did for the Wyoming trip.  Since there isn't really any wildlife to photograph in Moab, my gear was really landscape focused.  I packed one body, 3 lenses, my tripod and a few needed accessories.  Stephen put together an entire blog post about what he was packing.  It's worth a good read HERE.

So far I have to say this has been one of my top photographic journeys.  There is so much to shoot in the National Parks around Moab.  Jeff does a great job "chasing the light" as he likes to call it and seems to always know which location to be at and what time to be there.  Overall, this photo tour has been a great value.  My expenses were the following; $600 for the tour (he splits it into 2 payments), about $360 for my flight and $369 for my hotel (5 nights 4 days) plus a little for food/snacks.  All said and done I probably spent close to $1400.  But in the world of guided photo tours, that is "Dirt Cheap".  Normally something like what DCPT's offers would run over $2000.  A great value!

I returned home exhausted and with a suitcase full of red dust and sand covered clothes and gear.  But it was all worth it!  I've made some new photog friends and added a bunch of quality images to my portfolio.  A big Thank You to Jeff Clow for hosting another memorable photo tour.  I appreciate what you do buddy!

You can view my images from the trip as I add them to THIS flickr photo set.  Enjoy. 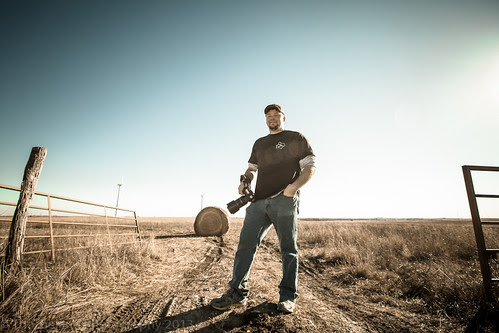 The Comeback Kid, a photo by Thorpeland on Flickr.

Life in Texas often brings quite a few mild days during the winter. Forget the heavy coats and snow boots. Just throw on a long sleeve shirt and some jeans and you'll be fine. My friend Rocky and I took advantage of one such nice February day to head out on a photo drive and create some fun and interesting photos.

This was an especially fun day for Rocky. About a year ago he had to sell a majority of his camera gear to help pay for school. Not being able to get out and shoot for so many months left him missing the days of driving down dirt roads looking for a great photo opportunity. Well he got that opportunity when I upgraded one of my camera's. Rocky immediately expressed interest in buying it and getting back in the game!

While at one of our photo stops, I asked him to pose in this hay field gate for a portrait. I jokingly said "this is your comeback portrait". But, I feel it really represents his return to photography and the adventure that comes with it.

Portrait of a Skater 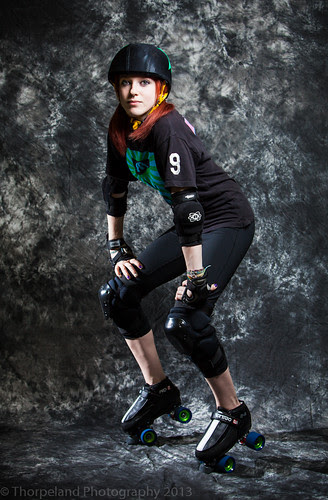 Portrait of a Skater, a photo by Thorpeland on Flickr.

Back in February I had the opportunity to work with a talented young up and coming derby skater. She goes by the name 'Baby Hurl' and is getting sponsorship from Atom, a roller derby gear company.

I traveled to her home rink, setup a mobile studio and we spent about an hour shooting posed shots and later a few (staged) action shots. I was most happy with this image.

Baby Hurl skates for the Rolling Rebellion at the House of Quad, which is also the home of the North Texas Derby Revolution. The derby league of Denton Texas.