So the time has come for me to begin building a new powerful home pc for multi-media and gaming use. Unlike my last rig, where I merely built it to run the current app of the day, I wanted to build this one to handle whatever the next 3 or 4 years may throw at it. By that I mean it doesn't necessarily have to have the power currently to run everything that will come out over the next four years, but be capable of upgrading with the latest technology as needed. Of course, I want to build it powerful enough to not need any upgrades for as long as possible. In the ever changing world of computers, this is a tough chore.

I started planning out what I now refer to as "The Beast" by hitting the web to do my research. After all, it has been at least a year since I upgraded my current PC and so much has changed since then! I wanted to make sure I wasn't missing out on any cool new tech that would give me an edge. One of the best places to start out with research, price comparing and buying is the website NewEgg.com. What makes this site so great is first off, their low prices. Few sites can beat their discounts. They also offer cheap or free shipping on items and often sizable mail in rebates. After weeks of planning, Ive mapped out my new rig. Below is the parts list, which Ive begun buying peice by piece over the past few and next few months.

So far i have recieved my RAM, MoBo, PSU and the Case. I havent started assembling anything yet. Waiting till i get it all ordered and in. Im salvaging a CD/DVD burner drive from my current pc. So I did not have to purchase another. The last thing on the list I will be buying is the CPU. Currently the 4800+ is one of AMD's top processors. And of course the top dual core CPU's currently out fetch a high price. Right now the price sits at $683. Ouch, I know. That's why im holding off for a couple more months to see what the price does as Intel gets closer to releasing its new "Conroe" line of CPU's which are claiming to be the fastest around. That normally starts a domino effect of prices falling. I plan to make updated posts, with pictures as I assemble "The Beast". I'll then post performace results and some benchmarks. Oh, the excitement!!
Posted by Thorpeland at 5/18/2006 09:35:00 AM No comments:

My Coed Indoor soccer team finished the season a perfect 10-0, winning the championship last Friday night. We pulled off a rather close 9-3 victory. I say close because we beat most teams by double digit margins. Im looking forward to next season, so we can "Threepeat" as they say in pro sports. If we keep the same team together, there is a good chance we can do it again!
Posted by Thorpeland at 5/15/2006 04:19:00 PM No comments:

It's a Done Deal! 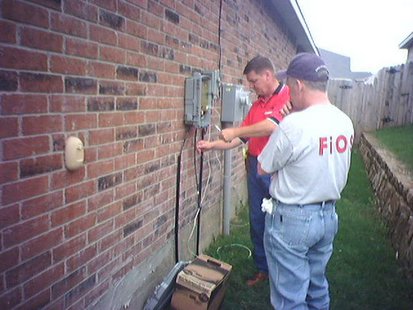 After nearly a 2 year wait, Verizon FiOS has been installed! For those who aren't in "the know", FiOS is a fiber optic connection directly to the home. This gives internet connection speeds which make DSl or Cable internet look like the days of dial-up. After it was set up I did some tweaking and was able to get my speeds to 15.33MB Down/2.38MB UP. That's darned fast! These speed are important to me because I don't just check email and surf the web from my home pc. I host video game servers, upload video's and download a lot of large software installs. This is definatly a good day in Thorpeland. :) Above is a picture of the Verizon installers patching the fiber line into the side of my house. 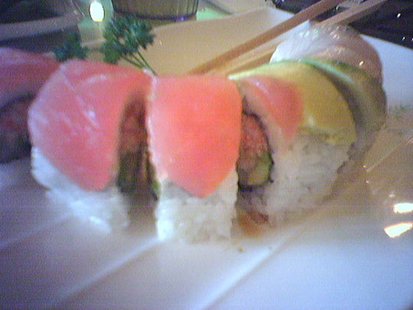 Many of my friends despise sushi. To me, this is an extremly tasty and fulfilling lunch! I highly recommend trying various types of "cali-rolls" if you get the chance. So many are so delicious! Don't be a wuss and be scared because it has some type of raw fish on it. Consider it a healthy break from the deep fried everything topped off with a loaded hamburger that you usually get for lunch.

Watch me drive a lap in the Cart class in Toca Race Driver 3. Mainly im just posting this to test the embeded video feature from youtube.com. Enjoy.

Both my Tuesday men's and Friday Coed soccer teams had their first round playoff games this past week. And both ended in wins for both my squads! Tuesday we played the badly outmatched "Average Joe's", beating them easily 11-3. This puts my men's team, Menace FC, in the B division championship match next Tuesday. We could have been playing for the A championship, but lost the our last game of the season, putting the top championship game out of reach according to our points standing. On Friday night, my coed team finished off our first round oppenent 9-5. This puts us into the final championship match and a chance to finish the season with a perfect 10-0 record! I see no reason why we should lose that game!
Posted by Thorpeland at 5/07/2006 01:08:00 PM No comments: