People In My Life - Portrait #9 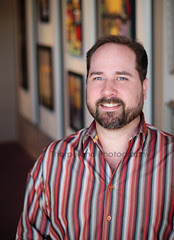 People In My Life - Portrait #9
Originally uploaded by Thorpeland
Meet Warren. As the owner of a local flower shop and the Oxide Art Gallery, Warren was the first gallery owner to give me the opportunity to show and sell my work. Since my first showing at Oxide, he has taught my a lot about the business side of art (pricing!!), framing, representing/promoting myself and working with a galleries needs. Warren is a great benefit to the local Denton art scene and a real nice guy. Warren agreed to let me take this portrait, if I sent him a copy for him to use on gallery literature. Deal!!

These photo's are a part of a new Portrait Series I am working on in 2009 in efforts to improve my portrait shooting and editing skills. Its also a great way to include the people around me in daily life in on my photography.
Posted by Thorpeland at 7/31/2009 10:02:00 PM 1 comment: 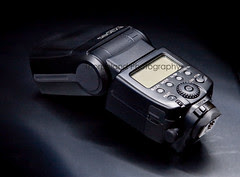 580EXII Product Shot
Originally uploaded by Thorpeland
The technique of light painting has always intrigued me. For those not in the know about what I'm talking about; light painting is when you set the camera for a long exposure, then use a flashlight to literally "paint" your subject with light. You can really get creative and produce some very interesting results.

Most people go outside and light paint shapes of people, or hearts, or write their name. While on Flickr looking at all the uses for this technique, my first thought was to attempt to use it as a way of lighting a product. I needed a techie gadget that would work well for this. So, I grabbed my 580EXii Speedlight flash and set it up as my subject.

I setup my Canon 30D on the tripod with the 24-105 f/4L lens zoomed in fully. I then setup my wireless remote so I could fire off my shots without touching the camera. The camera was set to f/8, 10 seconds at ISO100. And the lens was set to manual focus, because the cameras IR would hunt for what to focus on once the lights were out in the room. The 580exii was set on a black laptop with a black shirt draped over some things behind it to give it more of a totally black studio look.

I then sat in a chair next to the flash gun, wireless remote in my left hand, LED pen light in my right. I pressed the shutter release button on the remote and began counting slowly to 10 as I used the pen light to paint smoothly around and over the Canon flash. I did this several times, painting more from different angles or spending longer lighting one area of the shot. I was finally happy with this exposure. It seemed to have the best "studio" look and feel to it.

Once I was done shooting, I unloaded all the RAW images into Lightroom 2 and narrowed my choices down to this image. I adjusted the exposure and fill light slightly, then increased clarity and reduced digital noise slightly. Then exported to CS3.

Once in Photoshop, I did notice there was still a bit of digital noise, caused by the long exposure. It wasn't bad, but for a product shot you want zero if possible because people will try to study the object closely, looking at the details. I then applied Smart Sharpen at 5.5% Then using my pen and tablet, I carefully created a selection around the flash and chose Selection--> Inverse. Which caused my selection to now select everything around the flash. I chose Filter ---> Blur --> Gaussian Blur. And set it to 4.5 pixels. This gave it a softer look in the lighting and really hid some of the noise. Once I had the noise pretty much gone, I used the healing tool to remove some obvious dust particles that were sitting on the flash and the laptop surface. Finally, one pass through Noise Ninja to remove any remaining noise and I was happy with the final product shot.

Shooting in the Dark 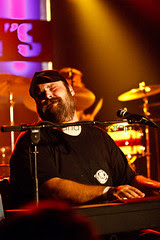 Oso Closo
Originally uploaded by Thorpeland
I got the call to photograph a local musical event here in Denton. A night of three bands ranging in styles and sounds, but surely to be a fun time. It's always a bonus when I get to see live music and also photograph it at the same time. Its always exciting, always technically challenging and always fun stuff.

This photo was the lead singer of local band Oso Closo. A true rock band that really had their act together. And it showed, as the crowd really got into the show. It was also the most crowded act of the night as I had to really fight for space to shoot from. It was all good though! Everyone was having fun and rockin out. And I came away with a bunch of nice shots for the evening.

This particular shoot was for the Denton music scene website www.mydentonmusic.com . They promote the local music and review bands playing in the city. A great resource for all the local talent coming out of Denton Texas. Be sure to check them out!
Posted by Thorpeland at 7/21/2009 02:24:00 PM No comments:

It Had Been Too Long 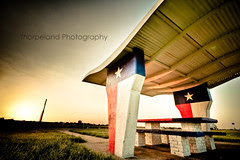 The Rest Stop
Originally uploaded by Thorpeland
Yeah, its been waaaaay too long since I uploaded any new photos. I believe my last upload was just before the 4th of July. It had been a combo of not really having any shoots lined up and not having anything I felt was quality enough to post. Im pretty picky and critical of what i choose to upload. What people see online is probably 3-5% of what I shoot in total.

Anyhow, I decided to make myself shoot last night. I grabbed the camera bag and headed out on a photo drive. Wandering back roads and highways, just looking for whatever looked.... interesting. As the sun started setting I came across this highway rest stop. It was kind of in the middle of nowhere, but when i saw those Texas flags on the picnic table area's, I knew there had to be a decent shot in there somewhere.

I shot for a while at different angles using various lenses. Then the idea hit me to incorporate this little pavilion, the flag colors and the setting sun all in one shot. Doing so of course is a very challenging exposure to nail with the camera. So I bracketed my shots and created this HDR image of what I saw. I feel the end result gives it a look.... and feel that really grabs the eyes attention. And that's whats important to me, being able to "feel" a photo when viewing it!

I took somewhere around 200 photo's during my evening drive. But only 3 made it to my flickr stream. Probably only this one will make it to my website (www.thorpelandphotography.com).