Getting Back to Business

Since my knee injury scare around Christmas, I've been taking it easy and not playing much soccer. My "comeback" started 4 games ago. My first steps back onto the pitch were with my men's Tuesday night team. I knew I had to build some confidence back again in my knee and build my strength back in my lungs and legs. Being off from soccer for almost 4 months had turned me soft. I needed the time to heal up, but I could not keep in match condition.

I took the field that Tuesday night and played very cautious. Passed most the time, played more defense rather than striker. I don't think I even took one shot on goal. Which was fine with me. I just needed to get out there and see how things felt. And things were pretty good after that first game back. Very small amount of soreness the next morning. But I knew I was getting back from an injury. I was happy with my performance and to top it off, my team won that night.

The second test for my knee was the following Tuesday with my mens team again. This time I played with more confidence and played more aggressive. Still no goals this game, but I did get a few shots on goal which only by luck they did not go in for a score. I did discover though, my fakes, speed and first move on defenders was a step slower. I would perform a fake like I normally would and the defender would already be in the spot I was headed for to take away the ball. I could tell I wasn't quite ready to be a scorer again. Just a supporting roll. Which I was fine with that. My lungs felt stronger and my overall physical condition felt better. I knew my shot and moves would come back... in time. Although I played decent, we lost that one to a better team. But it was close.

It was time for a new and third test for comeback. My Friday night "A" division coed teams game. I played with more confidence and the knee felt the best yet to date. But I just couldn't find the back of the net. Lots of missed shots, I was always an inch or two off target. Frustrating! It didn't matter, we won BIG. I mean like 13-6. Which isn't abnormal for that team. We're very good. In the final 30 seconds of the match I did manage to put in a one-touch right foot shot from about 6 feet in front of the net, past a diving keeper. Nothing to celebrate over. I was just glad I didn't miss again. But, it was my first score since coming back. It was a start.

Tonights game was the fourth test so far. Men's league game against a Mexican team. I looked at their schedule and saw they had no wins yet this season. I don't put much into that. These teams usually play very well. They pass quickly and really work the ball around fast. They are also normally very aggressive on defense and can frustrate strikers by double and triple teaming players. From the start of the game though, I could tell we were the better team. We passed the ball very nicely, setting up combinations and many scoring chances. Finally one of our guys scored making it 1-0. They began attacking with more players now, desperate for a goal. Then, a few minutes later our same guys scores again! Two-zero! My knee so far was feeling great and I had created several scoring chance for my team and almost scored myself, once. The other team finally scored a goal making it 2-1 and they smelled a comeback. They were fired up and really attacking. I came onto the field and our midfielder played a high, long ball over my head to the end wall. I raced pass the defender and beat the on rushing goalie to it. I took a quick right footed shot from almost no angle and scored! It was a great feeling to score a meaningful goal, under pressure against a decent team. I was feeling fired up now and wanted to stay on the field a bit more. Five minutes later, I was glad I did. I had the ball at my feet with one defender in front of me. I did a quick left footed drag the ball inside and flick it to the outside and then a quick left foot low, hard shot and the ball beat the keeper on the near post for a very nice goal! This was a goal I'd be proud of even before my knee injury. I then subbed out and only got one more shift in before then end of the game. I took it easy and worked on some conditioning by running hard. We won the game 4-2 and I'm ready for Friday's coed game! I'm finally getting back to business!
Posted by Thorpeland at 4/24/2007 11:00:00 PM No comments: 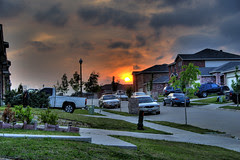 I was out in the front yard watering a tree when I looked up the street into the setting sun. My first thought was, "grab the camera, this might look cool!" I was right. I think of it as another step in the HDR learning ladder. I have lots of ideas of things to try now. Stay tuned!
Posted by Thorpeland at 4/22/2007 10:28:00 PM No comments:

There's a fairly new technique emerging in the world of digital photography. Its known as HDR Photography. This stands for High Dynamic Range. Put simply HDR photography is a method of taking a series of shots, each at a different aperture setting, covering a large range of lighting values. Then, using special HDR software to combine the 3 to 8 shots of the scene to create a single photo which would be impossible for a digital camera to take in a single snap. It leaves you with a picture with no under exposed areas, no over exposed areas... perfect sharpness and lighting balance and a color depth rivaling the best single-photo shot's made.

Now that I've basically explained what HDR is, I did a basic demonstration using a software package called Photomatix. This is software specially designed to create HDR photo's. What you will find on the link below is a series of photo's. The first six small ones are each shot taken at aperture settings starting at -2 all the way up to +2. This creates extreme shadows to extreme brights. Then the final (7th) large image is the final HDR product. You'll see there is perfect lighting balance through the entire photo. Not something I could have done even if I spent time setting up a single shot to be perfectly lighted. The final photo has the software's watermark on it because it's still in trial mode. I have not yet purchased it. But so far I'm very impressed!

That game would be one known as Armed Assault. This first person shooter type game simulates being a soldier on a huge battlefield. You have the choice of many different types of aircraft and vehicles to explore and fight in. Half the fun of this game (sim) would be it's editor mode. This mode allows you to create any scenario you can imagine or come up with. I used the editor and some video capture software to create the video below. The game is already out in most of the world and is released in the U.S. on May 1st. Enjoy the sights and sounds of Armed Assault. A.K.A. - ArmA!