The first official trailer for the game Armed Assault has been released! This is great news as this highly anticipated game nears completion. Watch and enjoy!
Posted by Thorpeland at 8/26/2006 01:22:00 AM 1 comment: 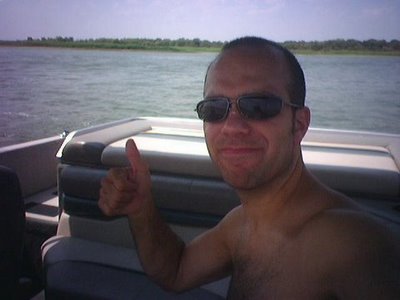 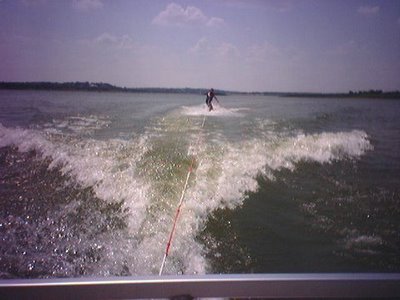 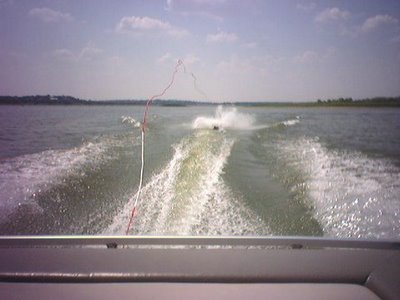 Saturday was spent out on the lake with Jimmy and his buddy Steve. Jimmy had bought a new wake board and wanted to test it out. As you can see above, he got up and going but crashed a number of times when we took him back over the boats wake. It was kinda funny watching him wipe out. But he did do good at getting up and going out of the water. Which is not easy. It was a fun,relaxing afternoon. We stopped to swim at party cove and got the boat up to near top speed in the open area of the lake. Fun times! 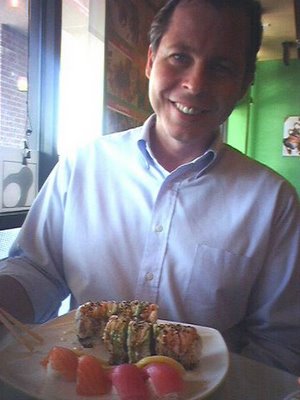 Today I had lunch with my good buddy, EVP. I talked him into trying out sushi with me at a local place I enjoy eating at about once a month. Now, EVP is normally steak and potatos type eater. Nothing really out of the ordinary. So getting him to even agree to have sushi for lunch was an accomplishment.

We arrived and began browsing the menu. So many types of sushi, so many choices! I could see EVP was overwelmed. He began asking the waitress what she recommends because he was such a noob and couldn't make up his own mind. She pointed out a lunch special which included 6 shrimp cali style rolls, plus 4 sushi of his choice. Again, he couldn't make up his mind so he told her to pick. She chose two salmon sushi and two tuna sushi. The plate arrived and I could see EVP's face. He looks up at me and say's "man I don't even know what to bite into first". This was all so new to him, he had no idea what to expect. I told him start with a cali-roll and see what he thought. He wrestled a bit with the chopsticks but mananged to pick one up, dip it in soy sauce and fit the whole thing into his mouth. He chewed and chewed, then chewed some more. I starred at him awaiting his answer. He said "well, its different". HA! Next he wanted to try the actual real sushi. But he didn't want the rice, just the slice of fish off the top. He didn't seem to mind it and continued to eat all four fish slices leaving the rice ball on this plate. He then went on to peel the rice layer off the cali-rolls and eat the rest of them piece by piece. When he was done, he almost had cleaned his plate, except for the rice from the rolls. I was impressed. For a guy who was terrified walking in, he did some damage to his lunch! But then EVP lets me down. On the way home, he confesses he will never eat sushi or there again. Too funny, I think he actually didn't mind it but he can't bring himself to admit it. That's ok, I accomplished my mission. Getting him to try sushi. One sushi hating friend down, dozens to go!

The San Fran 49ers may have beat my Bears 28-14 in their first preseason game last weekend. But let the video above be a reminder of what "Da Bears" can and will do to them once the real NFL season starts up in a few weeks. I hope they have not forgotten about this NFL record setting kick return against them last season. I see a great season ahead, barring any big injuries. Its too bad my Bears don't play the Dallas cowgirls. It would be quite ugly for them! LOL
Posted by Thorpeland at 8/15/2006 02:53:00 PM No comments: 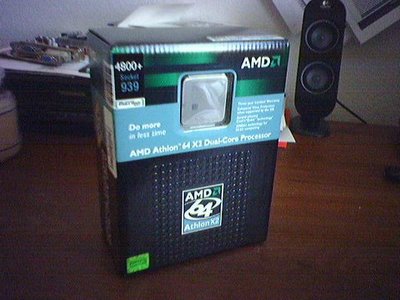 Powered by this AMD X2 4800+ dual core CPU, my new power gaming PC rig is up and running nicely. Im very impressed in this processors speed so far. Despite only being 2.4Ghz per core, its clearly faster than my Pentium 4, 3Ghz Intel CPU. I look forward to pushing this thing thru a gauntlet of tests soon. One of the first tests I ran the new PC thru was the 3DMark06 Benchmark. The industry standard in PC benchmarking. It scored very nicely as you can see my results below!

Is This the Way to Amarillo?

Too funny! These guys were definatly creative with their down time. I guess you have to pass the bordom somehow. Why not entertain!
Posted by Thorpeland at 8/09/2006 11:45:00 AM No comments:

I come home today to find out my homes air conditioner has malfunctioned and is not working. Its about 86F inside the house. We have fans going which are helping. But its still very warm. Luckily we are having some cloudy skies with scattered showers to help keep the outdoor temps under 100. Ive sent in a home warrenty request to the builders, so they should contact me soon about fixing it. Hopefully tomorrow! If it gets up to 100 again, its going to be very hot in the house! Blah, this sucks!
Posted by Thorpeland at 8/07/2006 08:51:00 PM No comments: 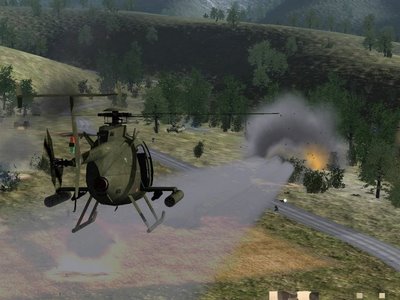 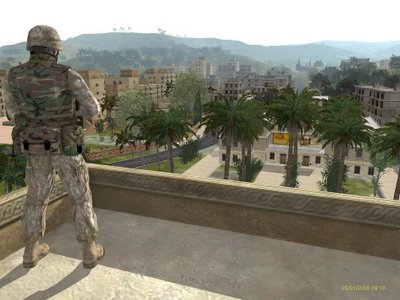 This screen shots are from an upcoming PC game called Armed Assault. This is one to keep an eye out for if your a gamer and a fan of FPS (first person shooters). Battlefields are over 400 Sq kilometers, you can walk, drive or fly anywhere and its based on realism. Meaning you can't hop around like a bunny and if you get shot once you can die. With my new power PC almost ready, I can hardly wait to get my hands on this game. For more information check out www.armedassault.com .

Ive Got the Touch!

At least this past Friday night I did, while playing in my co-ed soccer teams season opener. A bit of history which let up to this big game. Four of our top players from last seasons championship team, defected to the team we met in that final game. A team who was already very skilled and could have beaten us. Now, they had these four players from our team and were set to get an easy win in this first game. During warm-up's my teammate Gregg really boosted confidence by saying "Im dreading this game. We're gonna get killed!". Have some faith in us Greggy! I thought we had a chance, but it was going to be very tough to win. So the game starts and within the first five minutes, they are up 2-0. I then sub in for one of our guys, but the other team didn't see me come onto the field, so no one marked up to defend me. We had a corner kick and my teammate saw me come onto the field. He gave me a great pass and I hit a perfect left foot rocket of a shot into the far upper right corner of the goal. 2-1. This turned the entire game. A couple minutes later, I get the ball in the left corner and hit a perfect pass to Brittney, who volley's the ball into the net at close range for a nice 2 point girl goal. In the second half I stole the ball from their keeper just outside the goal box and shot it into the corner above a defenders head. Then, a few minutes later, I picked off a bad pass and had a break away. But at mid-field I noticed their goalie was way out of his goal box. I lobbed it high into the air and into the open net as he dived in vain to get to it. The buzzer sounds finally and we win it 6-4. I had 3 goals and an assist to a girl for her 2 points. With our toughest oppenent out of the way, we can now focus on the weaker teams and building up some points in the standings. We're off to a great start!
Posted by Thorpeland at 8/06/2006 01:28:00 AM No comments: 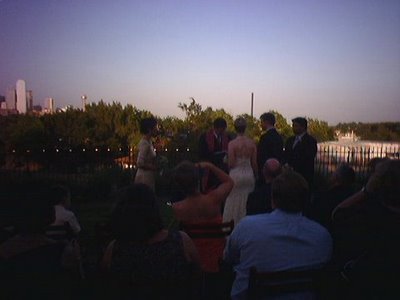 Congrats to my good friends Craig and Becci. Last night in a small cerimony they were married. As you can see from my dim phone-cam pic, it was an outdoor event over looking downtown dallas. It included a small group of family and friends, followed by a reception with cake, food and drinks. They are off today for New York and their honeymoon. Congrats again guys! We're happy for you both. 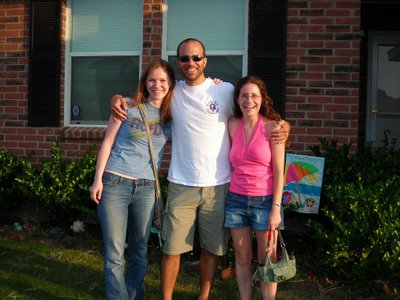 Recently one of my favorite friends came back to Denton Texas for a short visit. My old friend Becca (Becca's on my right, Emily on my left) made time to come by and grab a bit to eat with me, Emily and my other buddy Dan who was in town. It was so good to see Becca again. She moved to Colorado about a year ago and resumed her life there she had left when she first moved to Texas. She is so much fun to hang out with. Always quick with a witty remark or funny comment to put me in my place. Ha!

Becca, it was very nice to see you again. I had a lot of fun and glad you got to stop by our house during your short stay! I wish you were still around in Texas, but Im happy you're enjoying Colorado. Be sure to visit again some day buddy! We miss ya!