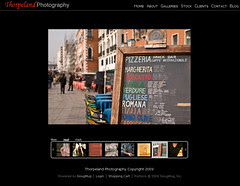 Thorpeland Photography Goes Live!
Originally uploaded by Thorpeland
So yeah I finally got around to building myself a real photographers website. For quite some time I had just used a quick page I created from scratch. I'll admit, it looked like something a 12 year old put together. It was bad. For the past almost year, Id used Smugmug to sell prints and display my work. But I never really utilized its customization ability which comes with the Pro account I had. Well I finally rolled up my sleeves, dug into their forums and help topics and made enough sense of CSS code and html to put together a good starting point of a website. Turns out Smugmug allows Pro account holders to change just about everything on their web space, totally removing the normal Smugmug look. Which is great. They also have really good support and helpful people in their forums. For example, i was stumped as to why some text wasn't formatting as I wanted it to. I posted the problem in their forums and someone replied with what was wrong with my code, within 15 minutes! Very cool. So now I've got to get my galleries populated, all prices standardized and begin making full use of its ability. Im just relieved its finally put together. And surprised at myself for figuring it all out!
Posted by Thorpeland at 3/31/2009 03:25:00 PM 1 comment: Bikers Ride
Originally uploaded by Thorpeland
This past Saturday, the Denton Area Photoraphy group from Flickr met up on the Denton square for a meet-up and shoot. We had 5 from the group show up on the cool, over cast day. Not too bad. Once everyone met and chatted it up, we started walking the back streets and alley's of downtown Denton. It was a lot of fun just shooting whatever caught our eye and talking about photography. It's really cool to put a face to the people you talk to and comment on the pics of online. Of all the photos I took, this shot of the motorcyle is the one I'm most happy with. It was parked near a parking garage and I knew a low view of it with the wide angle lens would give it a memorable look. A little post processing magic and I was all smiles. We plan to have another meet up hopefully soon as the weather warms. We just need a better location to go to this time. Its time to start scouting!
Posted by Thorpeland at 3/16/2009 11:47:00 PM No comments: 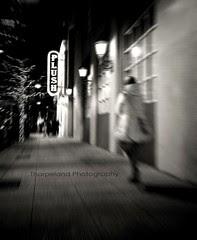 Plush
Originally uploaded by Thorpeland
I went back through the archives of a Dallas street shoot I did a few weeks back and came across this shot. It was actually one of about 8 shots snapped at this scene. My friend Michael and I had just walked by the nightclub Plush and I wanted to get a shot which really showed the feel and vibe of the night. There were a lot of people outside in line to get into this trendy club. But I didn't want a bunch of people starring at me as I took the picture. So we kept walking by the club. About 30 feet past the door we stopped to survey the scene. We noticed a young woman dressed for clubbing and walking quickly our direction to get in line. I knew this might make a good shot. I quickly set my camera ISO to a higher setting, set it to all its focal points and to multi shot mode. As she walked by I held the camera at my waist and pressed the shutter, firing off about 8 shots. When I returned home and looked through the shots, I really wasn't happy with any of them. They were all rejected for other shots of the night.

Well a couple weeks went by and I went back to this shot. It was slightly blurry because of the movement while trying to shoot it, but I still wanted to use it... somehow. I liked the feel of it. Then an idea hit me. What a perfect chance to add a little radial/zoom blur in Photoshop! I placed the focal point on the nightclubs sign, which luckily was fairly sharp to start with. I then set the zoom level to 12%, giving the view the slight feeling of movement. And then converted it to B&W using a Lightroom 2 preset called PH Perfect B&W, which is one of my favorites because of the tones it uses. All said and done, I was really happy with the result and I was able to salvage a good shot I had previously dumped.
Posted by Thorpeland at 3/14/2009 10:52:00 PM 1 comment: 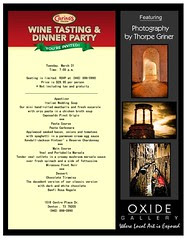 Dinner, Wine and Thorpeland!
Originally uploaded by Thorpeland
I recently found myself fortunate enough to have some of my work placed in a local consignment art gallery. After attending an artist Open-Call, three of my pieces were selected (along with about 25 other artists) to be put on display and sale for a 3 month span. But I was then approached by the gallery owner to be the featured artist for this dinner event held at the local Carinos Italian restaurant! This was a big surprise to me. Now, the only catch was I needed to come up with more prints to fill the walls of the room the dinner will be held in. So as you can imagine, this week has been spent in Photoshop, uploading and ordering prints... frantically. The above picture is the flier that went out. I will have 21 pieces on display and sale for the evening. If you live in the Denton Texas area and think you might want to come out to this event, feel free to contact the restaurant to RSVP! Guests will be treated to food not available on Carinos' normal menu and variety of wines. And of course an introduction to the artist/photographer of the evening. ME! :-D

If you cannot make this event but would still like to have a look at the gallery, be sure to check out Oxide Gallery in Denton. Its located on south bound Carrol and Hickory and there's currently a lot of good stuff on display by many talented artists!
Posted by Thorpeland at 3/14/2009 10:29:00 PM No comments: 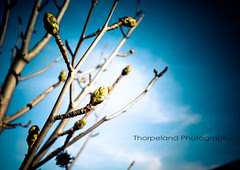 Its Official
Originally uploaded by Thorpeland
Walked out in the backyard this past warm Friday afternoon to see my tree's with little buds on the branches. This is great news as its proof spring is finally here. I am so sick of grey skies, cold weather (even by Texas standards) and bare branches. Im ready for spring and even more ready for summer and long days. Which by the way, don't forget.... "Spring Forward" at 2am this Sunday morning (March 8th). We gain an hour of daylight back!! Sweet! Nothing is more depressing to me than coming out of work at 5pm to a sun that's setting on the horizon. So... here's a quick shot welcoming the return of Spring and warm Texas weather. Bring it on!
Posted by Thorpeland at 3/07/2009 07:33:00 PM No comments:

Man on the Street Man on the Street
Originally uploaded by Thorpeland
This particular man on the street was my accomplice for the evening, Michael. We were walking around downtown Dallas looking for more things to shoot when we stopped at this light waiting to cross. I still had the 10mm wide angle on and knew this perspective would make an interesting shot. I toyed with this shot giving it various white balance settings and hue's. But in the end true Black & White just looked great. It gave it that real street feeling in a photo I love. I put no description on the bottom of this photo in the Flickr post. I felt the mystery of, "who is this man standing on an empty city street?" worked well to increase the interest of the shot.
Posted by Thorpeland at 3/02/2009 04:24:00 PM No comments:

Email ThisBlogThis!Share to TwitterShare to FacebookShare to Pinterest
Headed to Dallas 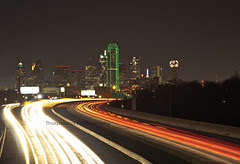 Originally uploaded by Thorpeland
This past Saturday was Emily's Bday, so we arranged an evening out with a group of our good friends. We all met up for dinner down at the Village Burger Bar for a great meal. But after that all the girls had plans to go to a dance club. This left myself and Michael with about 3 hours to kill. I already had my camera gear, so we dropped them off at the club and headed out around Dallas to do some shooting. As soon as I told Michael I wanted a cityscape shot of downtown and would like to get a long exposure shot of traffic, he knew exactly where to go. He took me to this small overpass on the West side of Dallas, crossing I-30. It was freezing that night with temps hovering in the low 30's and with the wind gusting. So we worked quick to setup the tripod and camera and start shooting. After about eight shots I got this one and was pretty happy with it. I believe the golden settings were f14, 15sec at 70mm. This was just the first of a few good shots that night as we drove around town. We repeated the same routine of jumping out of the car, freezing while shooting then jumping back in to warm up, all night. But I was having a blast. Big thanks to Michael for knowing some great locations.
Posted by Thorpeland at 3/02/2009 04:16:00 PM 1 comment: