Just People Watching
Originally uploaded by Thorpeland
Ever since buying the 7D ive been so caught up in mastering the new photo advancements in the camera. Its amazing how far camera tech has come since I bought my previous camera, the Canon 30D, just 3 years earlier. While the principals of photography remain the same... shutter, aperture and ISO, the advancements on what you can do with them have come a long way in the 7D.

The one feature I had been ignoring was the camera's ability to shoot full HD video. I started out as a video guy. Coming out of college my degree is in Broadcast Journalism. I spent hundreds of hours in the editing bay and with the video equipment. I enjoyed photography at the time, but dreaded film developing or the expense of it all. Digital photography just wasn't affordable like it is now. Anyhow, i enjoyed working with video and figured thats where id stay. Funny how a decade can turn that around. So I found myself with some free time last night and decided it was time to give the 7D's video a good test run.

I headed down to the main square in Denton, knowing it would be buzzing with activity. There's always people out shopping, hanging out, going to the coffee shops, playing music or just people watching. Like me. A perfect scenario for a little street videoagraphy. Using a variety of lenses ranging from the 70-200 f/2.8 to the 50mm f/1.4 I walked around the square capturing people, un-noticed. After a couple of hours of gathering footage I came home, unloaded everything into Sony Vegas 9 and started piecing it all together. The music I used was called "Vale of Plenty" from the soundtrack of Blackhawk Down. I felt it gave the scene a relaxing mood, yet put a slight tension in it, showing the scene is alive and could change at any moment. If that makes any sense? haha 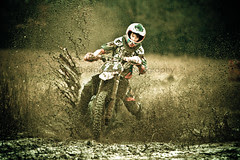 December Racing
Originally uploaded by Thorpeland
One of my favorite events to photograph has to be moto-cross or enduro off-road racing. Recently my friend JB asked if Id like to come out and take some photos of his upcoming race. Being that it was early December, it was cold, rainy and very muddy that week. Of course i wanted to come out!! I knew the weather would make for some excellent photographs. Its these tough conditions which bring out the drama of the day, the emotions of the riders and look awesome when frozen in the right moment.

There were several places on the track where I could tell would be perfect for what I was looking for. After a bit of a hike along the track, I came across this large flooded area in a field. The course took riders directly through it, no way to avoid it! I setup where I could shoot riders as they approached me and went past. As they began to notice me, some would hit the water with extra throttle to show off a bit for the camera. This kid was one of them. But as he nailed the throttle, he almost lost control and bit it. haha He did recover and rode out of the mud. But when i saw this shot on my camera LCD I knew i had a good one. This is probably one of my favorite shots of the day.
Posted by Thorpeland at 12/13/2009 12:37:00 AM 1 comment:

Stand By For Lift Off

Stand By For Lift Off
Originally uploaded by Thorpeland
Finally, getting a chance to add some posts to the blog. I'll start with this November shoot I had for my friend Paul. He recently bought a 2010 Chevy Camaro and approached me about getting some photos done of it. Id always wanted to do add some automotive photography to my portfolio, so this was the perfect chance to shoot a sharp looking car.

I had him wash it good and show up at a local rail yard in town. I felt this made the perfect backdrop for this car. I think it seemed to work well, adding a gritty, tough feeling to the images. The car looked great and was fun to shoot and later edit. I learned a few things and realized a few things I wish id done differently during the shoot. But overall im happy with the results. And so was Paul, which is what counts since it is his car. haha It wasn't difficult to make this car look mean and lean. And the photos really showed its color and body shape off well.
Posted by Thorpeland at 12/13/2009 12:13:00 AM No comments: