It was finally here! Last Friday, I was off to Las Vegas, Nevada to meet up with a few of my buddies for our friend Kirk's bachaelor party. We had this planned for about 3 months and everyone was looking forward to it.

I arrived at DFW airport around 7:30AM for my 8:40AM flight. I was to meet Kirk there so we could try to get seats together on the plane. A quick cell call later, I had found him just inside the baggage check area and we were off to our gate. That's when he turns to me and says, "there has been a change in plans". I look at him puzzled and ask what in the world he's talking about. He then say's, "Jennifer and I got into a big fight last night and the wedding is off". My response is, "dude, im still going to Vegas". I tell him to hold off telling Dan this news until we unite with him at the Vegas airport. I just had to see his face when he told him.

So we board the flight and lift off. I manage to talk the kid sitting next to me, to allow kirk to sit there instead. Kirk takes the seat next to me and within 10 minutes he's doing the head bob as he falls alseep. Why bother switching seats? On top of that, Kirk is a rather furry guy and his Wookie left arm is brushing up against mine on the arm rest the entire flight. Akward.

We land, finally get off the plane and trek thru the airport to find Dan. We meet up at the baggage claim and now we are three. Dan then tells me that one of our planned group, Mark, was M.I.A. and was an assumed no-show for this trip. Oh... bummer. I don't have to listen to 3 days of trash talk, bragging and exagerations. This trip just got better. LOL So now, we were just missing one more guy... Ziggy.

I found out Ziggy had flown into Vegas on Thursday, the night before. He was already at the hotel casino awaiting us. So to the cab and off we went, headed for the Monte Carlo. We get there and no sign of Ziggy. The hotel check in counter couldnt find record of him in their system. Not good. He's not answering his phone either. So we decide to walk the casino floor to find him. Within 15 minutes we find him, sitting at a "Texas Hold'em" table. Turns out there was some confusion with names and reservations and he had already checked in. We pull him away from our table and go to get our rooms.

The rooms were basic hotel rooms, 2 beds, a TV and bathroom. But it was clean and comfy. We were on the 17th floor over looking the New York, New York hotel and a few others. It was a nice view! We spent most the day down in the hotel's casino. I played a few slot machines while the other guys went into a poker tourny room. This lasted until evening and dinner time.

Dan had dinner plans and reservations already set. Although Kirk had already announced the wedding was off, we still wanted to have a nice dinner as a group. Everyone got cleaned and dressed up and met in the sports bar downstairs. That's when Ziggy tells us he's lost almost $5000 in the casino. But then he add's that he's been given the card of the casino manager and to call them if we need anything. So he whips out his cell phone and gives the guy a call. Fifteen minutes later, we have a limo to use for the evening. We all jump in and head to a restaraunt called "El Frisco's". Its a very unusual feeling to pull up to a restaraunt and have open your door. Then when you step out everyone else waiting to eat turn and stares to see who's in the limo. That was a new one for me! We go in and it turns out this is a VERY nice place. I felt a bit underdressed, but oh well. We get seated, order and then the food arrives. Wow! I'm not a huge steak fan, but this had to be some of the best steak I've ever tasted. The meal was delicious and I was stuffed. But I should be for $60.

Saturday was a normal tourist day in Vegas. Well, except for breakfast. Dan recommended we head over to the Wynn Hotel. The Wynn Hotel's rooms average around $400 to $500 a night. Not a cheap place. But their breakfast buffett is nothing short of amazing! For about $28, you get to choose from literally hundreds of different types of food. Everything from waffles, pancakes, eggs and bacon... to king crab legs, fillet minion and chef prepared omletts while you wait. Every corner I turned, I found a new type of food. This was truly a dangerous buffett. I could eat myself into a comma if not careful. Six plates later, I had almost done that. I had our waiter bring me some coffee, hoping to bring me out of the deep sleep I felt coming over me. We finally left the buffett and decided to walk off our food.

First stop, the Ferrari dealership inside the hotel. This place was pretty amazing. First off, it costs $10 just to walk around inside it... unless you are a prospective buyer. This was a showroom like nothing ive seen before. Each car, sits on a rotating pedestal with its doors and engine hood open. Prices ranges from $100K to $1.2 million. Yes... that's for a car. Of course they had ropes around everything so there was no sitting and taking pictures in the cars. And I had forgot to bring my digital cam on the trip to the Wynn Hotel, so I had to use my cell phone camera. Not the greatest but i can at least show some pictures of the day. The dealership has an upstairs main show room then a downstairs repair shop and museum. The repair shop reminded me of an operating room. It was spotless, clean and very sterile looking. You could probably eat off the floor. It was all very amazing. But hey, when you spend hundreds of thousands on a car I guess you want to give it the best money can buy. We learned a Ferrari oil change and basic service runs $3000. Holly crap!

From there we headed out to walk the strip. Its always fun to people watch out there. We'd walk for a bit then stop off at a hotel to check it out, the guys would gamble some then we'd hit the sidewalks again. We probably walked 5 miles that day. My feet were killing me. One of the things that really gave me a chuckle last time I was in Vegas was the guys who stand on every street corner handing out what looks like baseball trading cards. But if you look at them, you'll see they are escort calling cards. The card usually has a risque picture on it with the girls "name" and number. I started joking with dan that I was going to collect the whole deck of cards this trip out. So as we walked down the stip, I accepted every card each of these people were handing out. By day two, I had probably 60 "trading" cards. I guess its nothing more than a humorous souvenier from Vegas for me to look back on.

Sunday was quite a bit slower. Dan's flight left at 8am. Kirk and I were flying out that night and Ziggy's flight left Monday morning. I spent the day watching the NFL playoff games down in the casino. Unfortunatly, my Bears decided not to play much defense in the biggest game of their season. They allowed the weak Panthers to score early and they never quite caught up, losing 28-21. Close but not enough. Oh well, next year. It was a memorable game to watch in Vegas. I was surrounded by Bears fans, which was pretty cool. Everytime they made a big play or scored a touchdown, we all cheered loudly.

My Tuesday "A" division team played a new team last night. I dont think this new team did their homework before signing up, because they should have easily been placed in the C or even D division. We had no problem beating them 7-0. And their season will only get worse, because we're probably the 3rd or 4th best team in the division right now. I finished with 1 goal and 1 assist. The assist was especially nice because I beat two defenders on the dribble, and made a no-look pass to the back post of the goal, where my teammate Thomas was standing un-marked. He had an easy tap in for the goal. The score should have been higher than 7-0. We missed several easy chances. Im not sure if I like these kind of games because it doesn't make our team any better or sharpen us up for the tough teams that lay ahead in the schedule.
Posted by Thorpeland at 1/11/2006 07:26:00 AM No comments:

On to the Playoffs! 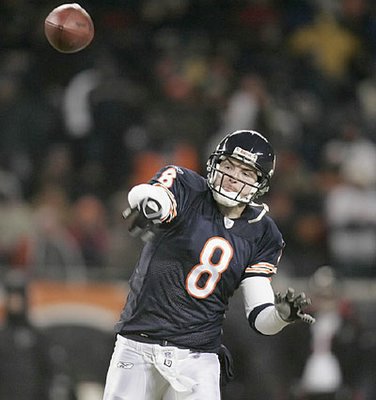 Well the Bears have won the NFC North and a first round bye into the playoffs! I won my lunch bet with Brotha James, although he has yet to pay up. He's completely disgusted that the cowgirls didn't make the playoffs and the Bears did. HA!! So, I'm hoping the Bears will play the Buc's in their first game at home. They should, and better, beat them! Then it's off to a real game. The NFC Championship against the Seattle Seahawks. Tough game! But its just amazing that just 2 winnable games stand between the Bears and the Superbowl! Im not predicting a SB appearance yet, but hey, they've got a better chance than some of the other NFC teams also playing for it. This has been such a great season, considering they looked like a college team the past couple years. With the return of Rex Grossman to the offense (pictured above), they are now a real threat to anyone they play. GO BEARS!!