In the world of "I told you so's", I had a huge one this past Wednesday night while out with some buddies. Since my old college roomate, Dan, is in town from L.A. for the week we thought we'd meet up with some other old college bud's at a bar in downtown Dallas. As we are going into the bar, Dan and I notice what looks like a homeless guy walking around out front of the bar, holding a tray with a bunch of sandwhiches wrapped in tin-foil on them. I didnt pay much attention to him, but Dan say's, "dude im starving I should buy one!". I tell him forget it we'll get something to eat after the bar. So we go on in, meed up with our buddies and have a good time. A couple of hours later we come out. The homeless guy is still there with his sandwhiches. Dan see's him and whips out his wallet and asks the guy how much for a sandwhich? I look at him and say, "are you kidding me?" He quickly answers "man im starving, its just a sandwhich". Its at this point I go on to tell him about the FDA, restaraunt food inspectors, food vendors licenses, ect. But he pays no mind to me and buys the tin-foil surprise. He opens it up and starts chowing down. All I hear is muffled talk about how good the BBQ sandwhich is and how he could NEVER get anything this tasty out in California. I take him home and drop him off.
The next morning I get a text message, "dude you dropped me off and i threw up". He calls me a few minutes later to also say he was throwing up and had diarhea most the night also. I gotta say it, I told you so man!! DONT BUY FOOD FROM A HOMELESS GUY!!! Who knows how old that BBQ was, or if it was even BBQ! Maybe it was dog food with BBQ sauce. HAHA! He's lucky he didn't end up in the hospital getting his stomach pumped. Lesson learned Danny boy.
Posted by Thorpeland at 12/30/2005 08:04:00 AM No comments:

It's been awhile since my last post. I finally have something news worthy to announce. Although it really isn't about me directly. Yesterday my Chicago Bears beat the dreaded Greenbay Packer, sweeping them in both games this season and winning the NFC North division. On top of that, they are in the playoffs with a first round bye! To make things even sweeter, the return of injured starting QB Rex Grossman has sparked a completely new offense. They are now putting points on the board and will be a much tougher team to beat in the playoffs. They'll need it. I fear they will face The Seahawks, who are awfully good. With this latest win, it also puts me closer to winning my best season record bet with Brotha James. Subway lunch will be mine! Be sure to watch the Bears in the playoffs, there will be some very exciting football on TV!
Posted by Thorpeland at 12/26/2005 02:21:00 PM No comments:

My men's "A" division team won the championship last night! Well, sort of. After last weeks loss in the semi's, we were out of contention for the first place match. So the league decided to make the 3rd place match, the Division II championship match. Odd, but hey, I'll take it. We beat our opponents fairly easily. I scored one nice goal and played a large roll in 2 more goals in the 7-4 victory. At least we get the free champ T-shirt. I can always use another T-shirt.
Posted by Thorpeland at 12/14/2005 08:57:00 AM No comments:

The Statistics of War 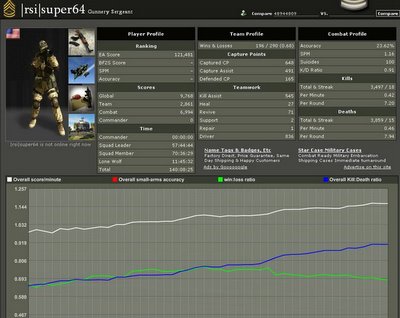 For anyone who is a Battlefield 2 fan, check out the website www.bf2s.com for a full break down of every statistic of every player in the game. It's very interesting to see how you actually stack up against players from all over the world.