October 28th Emily and I hosted our first Halloween Costume Party. It was a big hit with lots of people turning up! We had food, music and decorations and everything went smoothly. Thanks to everyone who came out! Im already looking forward to next years party. 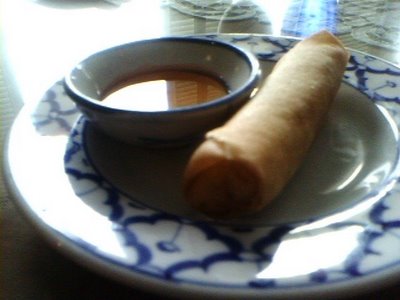 I was "working the phones" today at work and by the time lunch rolled around, I needed to get out of the building. My first craving was for sushi, but after consulting with good buddy Craigadiah, he suggested a new place to try called Thai Ocha. Needless to say, it was Thai food. Ive never really had Thai food now that I think about it. Plenty of chinese food buffet's but not Thai. So, being the versatile, up for something new kinda guy I am... that's where we were headed. We walk in and are seated by the hostesss and I begin scanning the menu. Ok, none of this made any sense. So I ask Craig for a recommendation for this round-eye's first time at a Thai restaraunt. He suggests the Pad-Thai. So that's what I order, but with chicken. He orders the same with Tofu. (Blah!) First we each recieved an egg roll, pictured above. It was your run of the mill egg role, but still good. Our food comes a short time later and I dig in. I'll have to admit, I have a new favorite dish. It was really good! So we're done and the bill comes. He and I each put our credit cards on the tray and our Thai waitress takes them away. She comes back a few moments later and holds out my card pointing to my picture on the card and asks in her broken English "is this you?". I was a little puzzled and said, "um.. well ... yes." Then she says Ok, and hurries off. I turned to Craig and said, "I wonder if we all look the same to her?" lol I found her question so humorous because Craig has blondish hair and light complextion and I have black hair and are a bit more tan. There's no way she could have confused us! Anyhow, we pay and leave and now I have a new lunch spot to choose from in the future. Good stuff!

Twenty-Two Pounds, One and a Half Inches

That's what I have lost since this past May. The next question I usually get asked is, "how did you do it?". Atkins? Nope. Miami Beach Diet? Negative! Another fad, fly by night diet scam? Nope. The day I stepped on the scale and I saw 190 pounds, I about flipped. Id never weighed that much in my life. I knew I had to make changes. But a diet? Diets don't work. You change your eating or whatever, lose the weight... then gain it back after you stop dieting. So I decided I needed changes, but not a diet.
So, I made the changes. But I didn't go on a diet, I simply changed the way I ate, just a little. I looked at what was causing me to gain this recent weight. It was clear. While at work, I would snack on whatever was in front of me. Candy, chips... and an occational soft drink filled the gaps between breakfast and dinner. So despite playing soccer 3 and 4 times a week, I was eating back the calories 3 fold during my workday. So first step, cut out un-healthy snacking and eliminate the soda pop drinks. I replaced the candy and chips with a mid-morning yogurt fruit dink and dried apple slices and replaced the soda drinks with bottled water.

After the first week I already noticed the weight dropping. I lost 2 or 3 pounds in the first week. I knew my plan was working. I picked up my soccer playing to 4 days a week when possible. I also switched from eating cereal for breakfast to drinking a chocolate Slimfast or eating a bowl of cottage cheese and fruit. For lunch I stuck with eating a Lean Cuisine meal. Then for dinner I ate normally, having whatever Emily had cooked or whatever we wanted to do. The only rule was I now had water to dink thru-out the day or when we went out to eat and while sitting around the house. This was all paying off and quicker than I expected. Soon I noticed the notch on my belt that I had always used, and was getting a little snug, was no longer fitting good. So I started using the next smaller hole in my belt! Which is over an inch smaller on my waist!

This weight loss has continued through the summer and into the fall. Now, here we are in October and im down to 168 pounds, down from 190. Weekly I get people at work that had not seen me in a few weeks ask if Ive lost weight. In soccer, Im quicker, faster and scoring more goals. Something that had dropped off a bit as my weight had climbed. And as icing on the cake, I actually have ab muscles i can see again! Ha! Now that I know the key to getting to the weight I want to be at, I can't ever see myself being overweight (in my personal opinion) again.
Posted by Thorpeland at 10/23/2006 09:13:00 PM No comments:

Well my Bears go to 6-0 this week after squeezing out a 24-23 victory on the road against the Cardinals. This game truly showed how amazing this Bears team is. With the offense playing the worst game of their careers, the defense and special teams scores 21 points to get the win. But let's just hope this doesn't happen again to them this season.
Posted by Thorpeland at 10/18/2006 03:01:00 PM No comments:

My men's team won a tough game tonight, but in a way I'd never had happen before. One minute left and the game was tied 5-5 after they had just scored. We're pushing to win the game. One of our guys goes for the ball against one of the other teams players near the wall and they collide. The other teams guy bounces off our guy and falls, hitting his head on the wall on the way down. He tries to get up, but staggers back down to his knees. He had cut the back of his head and was begining to bleed pretty good. Our guy who collided with him quickly signals for the ref to stop the game and get help for the guy. The other teams bench went bezerk! They demanded our guy get thrown out with a red card. So they all storm onto the field in protest. This was their mistake. The ref suddenly blows the whistle and says "Thats it, game over!!" And he gave us the win! Ha! That was definatly a first. Oh well, we'll take it I guess.
Posted by Thorpeland at 10/17/2006 10:23:00 PM No comments:

My Friday Coed soccer team opened the season with an 11-3 win tonight. I got a goal and our girls scored practically at will. Really makes it easy to get the win cause they score so frequently. Im finally getting over a series of injuries that have stricken me this season. So far these past couple seasons I have had pulled left groin, deep bruised right quad muscle, strained left foot and bruised right heel. As Ive healed up, ive been more effective on the field. Which is something ive been missing. So, the season has started and we're out to defend our 3rd league title and hopefully win another!
Posted by Thorpeland at 10/13/2006 09:52:00 PM No comments:

I know, this is turning into a Chicago Bears blog. But I can't help it, my Bears are now 5-0 and looking by far to be the best team in the NFL! The last few seasons they had a great defense. But now, they have the defense and one of the best offenses in the league. They aren't just beating teams, they're killing them! It's too soon to start singing the Super Bowl Shuffle, but one can't help but think this could be the year they head back to the big game. All of my Anti-Bear friends have suddenly become silent. They have absolutely NOTHING negative to say about my Bears. So, Dallas Cowgirl fans, just thank your lucky Texas stars you don't have to play the Bears this season. Your season is already going downhill on it's own without a pounding dished out by Chicago. hehe
Posted by Thorpeland at 10/10/2006 11:55:00 PM No comments:

My Chicago Bears continue to roll. Destroying last years Super Bowl runner-up's, the Seattle Seahawks 37-6!! If anyone doubted what the Bears are capable of, see the highlights above to be quickly corrected. Chicago now has offensive power to compliment their brick wall like defense. If this keeps up, the Super Bowl wont be an unrealistic thought! :)
Posted by Thorpeland at 10/02/2006 02:46:00 PM No comments: