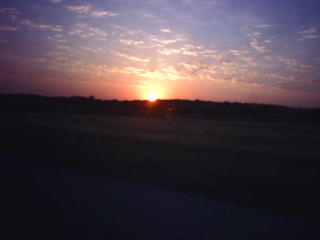 This was the view as we drove towards the sunset on our way to Odessa Texas. Last weekend, Emily and I had to take an unplanned trip to West Texas to attend our friend Cheryl's mothers funeral. She passed away unexpectedly. I felt bad for our friend Cheryl. She was on a trip to Romania working on her medical degree when she got the bad news and had to return home.
Posted by Thorpeland at 6/27/2005 02:10:00 PM No comments:

Its been a few days since my last post. It was just one of those times when not much is going on. No news worthy events in the life of me, I supose. Well this past week has brought some cool stuff to speak of. So, I fired up the blog to write about it.

First off, I bought 2 more Hermit Crabs for my new crabitat. They're nice sized purple-claws who aren't shy about exploring and mingling with my other 4 hermies already in the tank. I brought them home from the pet store, gave them a bath in their water and solution mix to make sure they were clean and mite free, then released them into the crabitat. They immediatly began exploring and climbing around. Each found an empty shell and began rotating it, trying to feel it out for correct sizing. Im sure their lives at the pet store were miserable. Packed in a small tank with many other crabs, never bathed, fed the same food all the time, nothing to climb on. Not in my crabitat! The 29 gallon fish tank with fresh, smooth sandbox sand and various climbing structures, fresh water and a variety of food is the envy of any hermit crab's home! What amused me was one of my original hermit crabs immediatly came out from hiding and approached one of the new crabs from behind. He latched onto the new hermie and began to shake him. This is called a "shell fight". If one crab see's another shell he likes, he tries to take it. They dont care if someone is already living in it! Funny thing was, the crab wanting the shell is much smaller than the new crab already living in that shell. The new hermie just pulled into his defensive position and held his ground. The smaller crab gave up and went on his way. The pecking order was established and he left the new crab alone. At first, I had the urge to break up the fight. But then I thought I should just let nature take its course and let them work it out. They did, all is well. I checked on them this morning before I left for work. Everyone was in one piece and getting along nicely.

Another recent event was the evolution of my slightly out-dated pc evolving into a powerful beast! For the techies, I upgraded from a Pentium 4, 2Ghz cpu with 768MB of DDR memory... to a Pentium 4, 3 Ghz cpu with 1.75GB of DDR memory! Gave it a fresh install of Windows XP Pro and threw on an 80GB slave drive to my current 120 GB main drive and ive got one decent gaming rig with the power to do whatever else I need to. I havent run any benchmarks yet, but I hope to soon. Im sure it will show some very nice speed improvements over my last configurations. I had a few days of hardware headaches as I configured everything. But I got those problems worked out. My only bottle neck on the system is my video card. Im running an ATI Radeon 9550 with 256mb on-board memory. While this is a decent mid-range gaming card, it wont do what the high end cards can. But I cant afford to drop $500 on a video card!

The most recent notable event took place yesterday. As payment for working on my buddy Steve's PC he gave me a tool shed for my backyard! That was really nice of him since the toolshed runs about $400 in local home improvement stores. He had recently built a new one at his place and needed to get rid of his current one. So, he broke it down, loaded it up in his truck and brought it on over. We assembled it Sunday evening and within an hour I had filled it with the clutter from my garage. Mr. Mower, Mr. BBQ and Mr. Gas-Can now have a new home... out of my garage. hehe I may mount some shelves to further utilize the new storage space. Thanks again Steve!!
Posted by Thorpeland at 6/27/2005 01:15:00 PM No comments:

My good buddy EVP was kind enough to donate to me a nice 29 gallon fish tank he no longer had any use for. Of course, I have no plans of putting fish into it. But I know a few hermitt crabs who will just love this new large home to roam around in and dig thru! I plan on getting everything set up tonight for them. I've bought new sand, some new climbing logs and I plan on even picking up a few more hermies. I currently have 4 who will inhabbit the new tank, but I hope to grow the population to as many as 10! The tank is of course, very deep, being a 29 gallon tank. So I'm going to be creative an build up some type of double decker crawling area for them. No where to dig and scavenge on the ground level? Then start climbing little buddies! It should look really cool when i'm done. I know the crabs will enjoy it. Thanks again EVP!!
Posted by Thorpeland at 6/15/2005 07:53:00 AM No comments:

Here is the picture that won me 1st place in a recent local photography contest, in the Nature catagory. Funny thing was, there were 6 catatogories. I submitted one picture for each catagory. But when I got to the nature section I didn't really have picture I wanted to submit, so I entered this one as kind of a filler. Although I thought it was a decent pic, it wasn't my favorite. But the 3 judges thought so and awarded me first place! I won a $50 gift card at a local photography store and my picture will be used in a 2006 calander along with the other winners. The picture has also been published in a magazine and the local newspaper. Kinda cool I think! 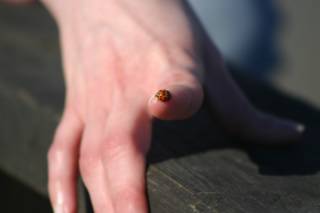