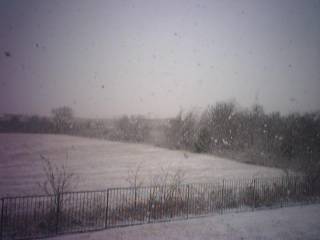 Toto, We're Not in Texas Anymore!


It seems to happen at least once a year here, and yesterday it did. I woke up to a snow covered landscape! It was great, giant flakes were falling and gave us about 4 inches of snow cover by the time it was done! Around 3pm the snow died down, but I could tell the temps were falling. About an hour later, more snow began to fall! Moving around during the day made me feel like I was back in Chicago. I had my heavy coat and gloves on, scraping off my windshield and having to drive slow over the side roads. It was awesome! haha By the time I left my buddy Doug's place at night, temps were definatly in the 20's and things were really freezing solid. This must have been the cause for all the wrecks I passed as I drove home. You see, most Texans dont have a clue how to drive when snow and ice hits the ground. It seems like their theory is, "If I drive really really fast, I'll just glide over the snow". Yeah... you will, and into anyone stopped infront of you!!
Anyhow, I took a picture with my camera phone from my back porch. You can see the size of the large flakes as they started to fall yesterday morning. And as a bonus, its still below freezing out today so the snow isnt melting away! Woo Whoooo!!