They're Actually Doing It!! 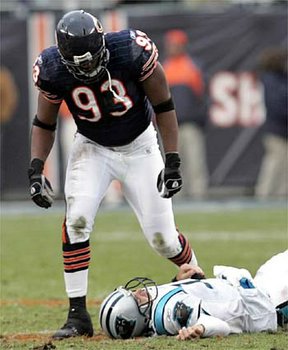 My once laughed at Chicago Bears have now won 7 games in a row. They hold first place in the NFC North and have silenced the doubters by beating NFC East leaders, The Carolina Panthers and then the NFC South leaders, The Tampa Bay Bucs. My lunch bet with Brotha James is looking better and better each week. His dallas cowgirls lost last week dropping them to a 7-4 record while this latest Bears win moved me to 8-3. The Dallas schedule only gets tougher from here out. They face the Giants, Redskins, the Panthers and the Rams. All tough teams for the cowgirls. The Bears face the Packers... twice, the Steelers, Falcons and the Vikings. I see a nice winning record by seasons end. No Super Bowl, but I'll take a couple good playoff games!