I Love It When A Plan Comes Together 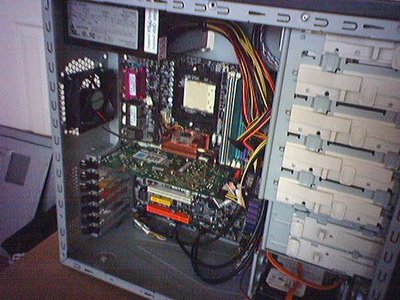 Since Early May of 2006, Ive been planning to build a new high end PC. With each week that passed, I shopped wisely, buying each piece as the right deal came along on the particular part I wanted. This is going to be a PC that has to last me for a few years to come. A PC with the power to run any application, video game or program with ease. But yet, still offer some upgradability for the future. But to buy top-of-the-line everything, would have cost me near $10K! Through smart shopping and deal hunting, i've been able to build an awesome system for $1080 after my mail in rebates all come back. That is FAR cheaper than the $2000 I originally calculated. The final piece of the puzzle came earlier than I expected. The CPU, or processor, which I had my eye on retailed for $632. Ouch, I cringe just looking at that number! But then it as announced AMD, the maker of this CPU, was about to slash prices on all models to compete with Intel's release of their new Conroe CPU. To my delight, this past Monday, the CPU which was $632 dropped to $309! I couldn't click "Add To Cart" fast enough! It wont even ship till next week, but at least I have one in my name now. Its the final piece I need before I can power it on for its first BIOS test and configuring. So far, I have to highly recommend the CoolMaster 530 PC case. Its completly tooless. Meaning you can pretty much put every part into your pc without needing a screwdriver. Only the motherboard mounts with small screws. After that, its all slide tracks and clamps that hold everything in place. Its great! Well I will update my blog in a couple weeks concerning the new PC. I'll try to include some benchmarks and speed tests. Stay tuned!