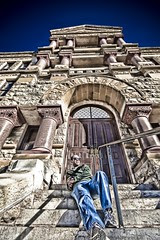 49\52: Let the Chips Fall Where They May
Originally uploaded by Thorpeland
Week 49
Packed up the camera gear and headed out Sunday afternoon looking for a good place to shoot my Week 49 photo for the 52 Week Challenge. But I didn't want this weeks to just be another click and shoot. It had to be a bit more interesting. After driving around most of Denton county for about 40 minutes, I found myself back in the old town square area. i stopped by Jupiter house for a tasty beverage and sat out side pondering what I could do for the shot I needed. I thought about the equipment i brought along with me. I was sick of driving so I began to look at what was right in front of me. The Courthouse! Now, the Old Denton Courthouse has shown up in pictures a 1,000 times. Ive even used it in what seems like a dozen of my own. So I had to give it a new spin. As I stood on the large steps going up the West side i looked at the large arches and the big pillars and remembered I had brought my 10mm wide angle. I had an idea! Got the tripod setup in a minute and fired off a few shots. When i saw this one, I knew I had gotten one worth keeping. I packed up and headed home.

Once I got the RAW file imported into Lightroom 2 I began toying with various presets and colors. Then I remembered I had been wanting to attempt that "Dave Hill" look in one of my shots. So after desaturating the colors and exposure a bit , I exported to Photoshop CS3 where I have the LucisArt 3 plugin. After a few minutes of playing with the sliders, I knew i was onto something. This was the final product, I was happy with it. I think its quite the eye catching shot and a pretty cool effect.
Posted by Thorpeland at 1/13/2009 03:31:00 PM