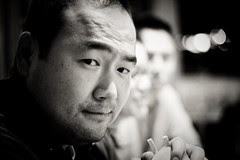 People In My Life - Portrait #7
Originally uploaded by Thorpeland
Saturday night I got a chance to expand my "People in my life" portrait series when my old friend and former college roommate, Dan, dropped in town for the weekend. Dan and I go waaaaaay back to our freshman year in college. While sitting in my freshman algebra class, confused, I noticed the guy next to me looking just as lost. Our conversation started up and I learned he lived on the same floor as me in the dorms. We were pretty much buddies ever since then. We played on the same soccer teams, joined the same fraternity and have kept in touch pretty much daily since leaving college in the late 90's. Dan now lives in the Los Angeles area as a project manager for a (somewhat) major car company. haha He's a good buddy, like a brother and im happy to make him a part of this project. Thanks for posing for the shot Sparky!
Posted by Thorpeland at 2/15/2009 06:14:00 PM