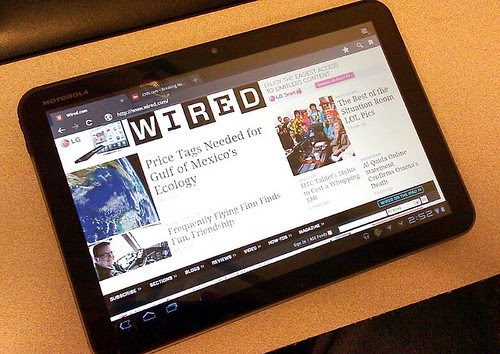 Where to start? Well, this is a Motorola Xoom. An Android tablet. There are a few Android tablets out now and I'd wanted one since the moment I saw them. I didn't think I'd be buying one quite so soon, but after stopping buy Best Buy for a hands on test drive I was sold. Most of these new tablets are running Android 3.0. Which ill say, is quite a bit different from the 2.x version currenly runing on Android phones. Its a bit more polished and optimized for tablets which really provides a nice experience. If you've used Android at all, 3.0 is even more intuitive and solid feeling. I've had the Xoom for one full week now and this is my opinion and review of the device.

Hardware:
The device has a 10.1 inch screen, dual-core 1ghz Tegra 2 CPU, 1gb of ram with 32gb of hard drive space, expandable to another 32gb via SD card. Really nice specs and actually tops the ipad2 in hardware terms. One of the key features I was happy to see was Motorolas choice to make the screen out of Gorilla Glass. This stuff is incredibly tough and practically scratch proof. So no need for one of those annoying stick on screen protectors. The Xoom is under half an inch thick, so its very easy to carry around. Its light but definitely feels solid and not like some cheap, plastic toy. I really like that it has a micro USB and HDMI out. Transfering files and music to the tablet is as easy as pluging it into your computer and dragging files over to it. The HDMI allows you to connect it to you TV and show movies or photos from it, to the TV. So cool. Do that, crApple. It has a 5mp rear camera with dual LED flash and 2 speakers. On the front its got a 2mp camera for vid chats.....but which doubles nicely as a mirror. :)

Likes:
So, what do I really like about it? Actually lots! It's small, light weight, has an awesomely sharp screen and its fast. I was recently asked if this will totally replace my laptop? In short, no. But it does manage to replace about 80% of what I used my laptop for. Which is what I bought the Xoom to do. Things once handled by my laptop such as email, facebook, twitter, flickr commenting, web browsing and online shopping are now easily handled by the Tablet. But tasks such as working in Photoshop or Lightroom are really best left for a laptop/desktop where you have the precision control of a mouse pointer and a bit more graphic horse power. Not to mention those applications are not available for tablets at this date. But I do love the "instant on" of the Xoom tablet. Being able to hit the web, running in just 2 seconds is very nice. Another thing I like is that Adobe Flash is supported. So when you go to a website that uses Flash for parts of the page, you still see the page as it was meant to be seen. Things such as embedded video's work nicely. If your'e wondering about battery life, you'll be happy to hear its VERY GOOD. I can easily get a full day of tinkering and web surfing in one battery charge cycle. In fact the first few days I had the Xoom I was bringing it to work and doing lots of "show & tells" with it all day. By bedtime, I still had 35 to 40% battery life remaining. Nice! Now, movie watching can change that. When watching a movie I had the screen brightness really turned up and it did eat a good chunk of the battery. But that is expected. Overall I can carry the Xoom around with me during the day and leave the charger at home.

Dislikes:
Now the question, is there anything I DON'T like about it? There are a few rough edges I'm sure will be addressed in time. I think my biggest gripe is Honeycombs (Android 3.0) webkit/browser. Using Facebook is a perfect example. The page loads, but using it is a major pain. You cannot close incoming chat windows. I click the X, but they just don't close. So I now have 5 old chats at the bottom of the screen I cannot get rid of. Frustrating. Typing in text fields are also slightly delayed. Now this only seems to happen on Facebook. Which leads me to think its something to do with the way the page is scripted. I haven't encountered this on any other website. Now, I did download the Opera browser from the Android Market and Facebook performed quite a bit better. Another option is to just use the Android Facebook app. Which works pretty well.

Bugs:
There are still a few bugs with some apps since weren't written for the tablet screen resolution. Some won't download to the tablet. Some will download but won't open. Some will open but crash when you try to use them. It's only a small percentage which do this and I'm sure it will improve in the months to come. I also found myself trying to download all the same apps I have on my Android phone. Then I realized I didn't need some of them. For example, my banking app. I no longer need an app for it. I can now just go to the website. Which really does work better.

Wrap up:
In conclusion, I absolutely love the Xoom tablet. The most common question people ask is 'how does it compare to the ipad'? Well, I chose this over an ipad so that should answer that question. You get more tablet for less money. I feel its a better device overall as well. Then again, I'm not sucked into the apple PR machine and tied to itunes. The Xoom does everything I need it to. I am a power user... not a beginner so I ask a lot of a device. Despite going through a few early adopter bumps with the first Android Honeycomb tablet, I see huge potential from the device.
Posted by Thorpeland at 5/07/2011 10:57:00 PM

I'm curious if you've tried to dock it and whether or not you tried using a Bluetooth mouse or keyboard.

Motta, I don't yet have any accessories. While there are blue tooth keyboards, there are no mice for tablets. These are all touch screens designed to do away with a mouse cursor. You can use a BT headset with it to listen to music or movies.