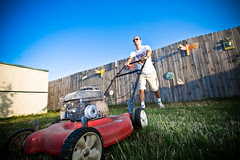 12\52: Suburban Drone
Originally uploaded by Thorpeland
Getting Explored!
I just checked Flickr Scout and found I now have 9 images which have made their Explore ranking at some point! Most are in the mid 100's to 400's but still. For those that do not know, Flickr has some secret formula for selecting what they consider the best 500 images each day out of the thousands and thousands uploaded. I used to think it was solely based on how many view the picture got and how many people "faved" the picture. But then one of my pics made Explore that had zero faves (people who saved it as a favorite) and very few views. So it kind of blew that theory out of the water. Either way im happy to see a few get in there. Its some type of photography goal to work towards and seeing a few get in there tells me im taking better pictures as time progresses. I suppose its a bit of a yard stick to judge how I've improved. I know I've gotten more creative with my shots, developed a better eye for composing a picture and massively increased my photoshop skills over what they were this time last year. I credit a lot of this to the 52 Week Project I started a few weeks back. Its really been a big help in getting me out with my camera, taking pics and trying new things. So, im up to 9 Explored images at this point. Hopefully more to come!
Posted by Thorpeland at 8/02/2008 12:41:00 AM