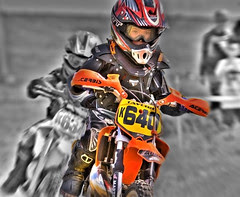 Battling For Position (Creative Version)
Originally uploaded by Thorpeland
A Day at the Races
This past Saturday turned out to be a busy one! I packed up my photo gear, met up with my buddy Beau and headed down to watch our friend JB's kid (Hunter) race in a dirt bike cross country event. He was racing in the 65cc class, which I believe still lists him as a "Pee Wee" class rider. But they were still pretty fast. Hunters friend and fellow racer ended up taking 1st place, while Hunter managed to get into 4th place at the finish. Earning him a trophy for the ride home! Right before Hunters race was the really little guys, the 50cc class. These kids were so small, their helmets made them look like bubble heads. I shot many pictures at both races. Each race being 10 laps and lasting about 25 minutes, came home with somewhere around 600 pictures to go through! I started editing them and had most up before bedtime. You can find a few on my flickr gallery at www.flickr.com/thorpeland .

I was supposed to go shoot a womens roller derby match later that night. But after being in the sun all day I was exhausted. I showed, ate dinner and just wanted to lay around and watch TV. Drained. There's another roller derby match in a few weeks which I hope to go to as I think it would make for some great action shots.
Posted by Thorpeland at 8/25/2008 10:06:00 PM