A Day At the Air Show! 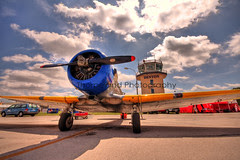 A New Perspective
Originally uploaded by Thorpeland
This Saturday was the long awaited Denton Air Show. Featuring many military and civilian aircraft. With an expected turnout of 10,000+ , there were more than a dozen aircraft on the tarmac for people to an up close look at . Followed later by aerobatics performed by prop planes, formation flying by WWII era fighters and later a real speed show by an F-16. The day was hot, but that didn't let that stop my fun! My friend Rocky joined me and we arrived early to get some good photos of all the aircraft on hand. We even ran into a few fellow local photographers out there, which is always cool. The show wrapped up around 4pm, with the F-16 giving everyone the final ear drum blowing performance of the day. I later found out a few aircraft canceled and backed out just before the day of the show. The massive cargo plane, the C130, an F-16 flight team and the A-10 Warthogs were unable to make it. Bummer, because those are all some of my favorite to see each year. Overall, a real fun Saturday.
Posted by Thorpeland at 6/20/2009 11:27:00 PM

Maybe one day I will actually make it to the air show to shoot some photos.