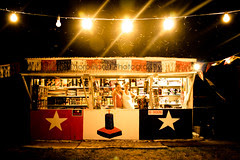 Fireworks Stand
Originally uploaded by Thorpeland
It's late June in Texas and that means the heat is suffocating, nights are muggy and fireworks stands are popping up everywhere. This combination of season and events gave me the urge to get in the car and drive North out of the city and into the rural areas of North Texas. A quick call over to my fellow photog buddy Rocky and i was off to pick him up to ride along. The plan was to drive straight north on Hwy 377, stopping at each little town along the way up and back to take photos. With about 2 hours of day light left and then lots of interesting stuff in the night to shoot, we knew this would be a fun drive.

After several stops, we can across this fireworks stand outside a small town called Tioga. We figured it would be best to leave the cameras in the car at first, rather than get out snapping pics. So we walked up to talk to the folks working the stand and even bought a couple fireworks. We then asked if we could snap a few shots. They were more than happy to play along. After about 10 minutes of shooting, we said by and loaded up in the car for the ride home.

Overall a very fun and productive photo drive. Its nights like this one that remind me why I was attracted to photography in the first place. The excitement of shooting photos, capturing the local feel of my surroundings and sharing them with people thousands of miles away who've never experienced a hot summer night in Texas. I guess its like sharing a window into my world. So much fun!
Posted by Thorpeland at 6/27/2009 05:43:00 PM