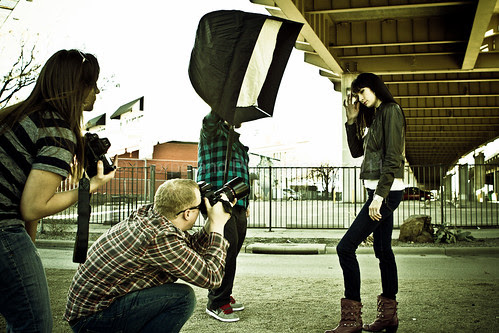 Photowalk Meetups are one of the best things you can do with other photography friends! The only problem is, such an event requires lots of time, planning and schedule arrangements. Or does it? Enter the wonderful world of photographers and Twitter. This particular photowalk meetup was arranged in a matter of a couple hours, less than a day before it occurred. It was Saturday evening and while driving I saw the tweet come through from fellow photog Kevin Hail (@khail) asking who would be up for such an event the next day since the weather here in Dallas was to be beautiful. Immediately replies began to fly back and forth as everyone interested tweeted their availability and interest. Just two hours later the event was a "GO" and my Sunday afternoon now had plans. Not an email sent, not a phone call made... not even an Evite created. Just awesome.

Many of my friends laugh at my use of Twitter and say they just don't understand it. Today's event is a prime example of its power and usefulness. In such a short amount of time on a very short notice, photography friends scattered all over the city were able to arrange a fun event. Let this be a note to those not in the-know. It works. ;)

And a fun day it was! With temps in the mid-70's and clear sunny skies we all met up in the Deep Ellum area of downtown Dallas. Kevin was nice enough to bring out his rolling suitcase of photography gear, which included flashes, a softbox and reflectors. Virtually everything you need for a mobile studio! But, not only did he bring the gear, he brought a his wife and model/photographer, Amanda. We all spent the afternoon just wanting the streets, stopping to shoot whatever caught our eye or for Amanda to pose when we found an interesting backdrop. The streets of the Deep Ellum area scattered with artistic colorful walls and painted murals. Literally a photographers dream. And we weren't the only people with this idea. All day long we must have seen 20+ other people wandering the streets with cameras and some doing actual photoshoots for clients. The area was really buzzing and it felt so nice to finally get out and shoot in good weather.

Well I'm really looking forward to our next meet-up. As we begin to enter the spring time, so many more locations open up as options. Stay tuned as I am sure I'll be posting photos and blogging about the day.
Posted by Thorpeland at 2/13/2011 09:20:00 PM