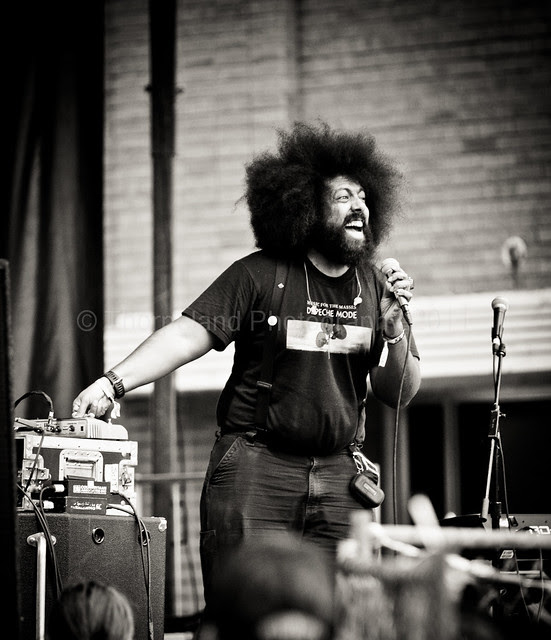 This past weekend I attended my first 35 Conferette (No, not Confederate)here in Denton. This is a music event with over 100 bands playing in bars, coffee shops and on stages in the center of Denton over a 4 day span. If you enjoy live rock music, this was not to be missed! Now, I believe this is only the third year of this music events short life. But it grew leaps and bounds from last years when it was known as NX35. Last year I didn't even know it was going on until the coffee shop I was sitting in told me I had to leave because they were about to start a show only for those who had already paid. Um, excuse me?? This year, they had outdoor stages setup, streets closed off and made more of an effort to advertise what was going on. I still don't think many people really knew, because everyone I asked during the week if they were going looked at me and said "going to what"? I have a feeling next years "35C" will be even bigger than this and will get more attention. I really hope so.

Ok so my experience. It ROCKED! I'll admit, wrist bands (which give you access) were a bit on the pricey side compared to a normal Denton music festival. Yeah I know all you 35C die-hards are screaming "But SXSW is like $200!". Well, this isn't Austin and this is nothing near or like SXSW (South by Southwest). So paying around $95 after tax for the 4 day wrist band is a shocker for those who aren't college kids in the know, or die hard indie rock music fans. But, I still really wanted to experience this event and get some photos. I bought a one day pass ($73) and headed out with my camera gear at noon, determined to make this a marathon day of music and photography.... and by George get my monies worth! :)

I arrived at the Denton town square, picked up my wrist band and a band schedule. The first band started playing shortly on the "Square Stage", I had no idea who they were but started snapping a few shots anyhow. I quickly realized how many of the bands start times were overlapping and if I wanted to get photos of all or most of them, I'd need to really hustle. So, I spent from noon till somewhere around 1:30am bouncing from stage to stage all over central Denton. I was tired, sweaty, pretty stinky and even a little sore. But it was worth it! I discovered some really great music and captured some good images from the day. I got to meet up with some good friends and even made some new ones. Most of the day my ears were ringing and I was bounced around by dancing crowds, but that was fun! I ended up shooting somewhere around a 1000 photos, which later narrowed down to a few dozen I was really happy with. This can really be an epic experience for those willing to really get out there and enjoy live music at its best.

Now that I know what the event is all about and how it works, I think im going to try to make all four days next year. I think one of the positive results about the event price was unlike other Denton music festivals, at this one I didn't have to fight my way through an endless traffic jam of family's pushing baby strollers and dragging their kids in-tow. It was really a crowd of true music lovers and people who really wanted to be there for what it was. Which was nice. Now that its said and done, I can honestly say this was the best music event I've been to in Denton since moving here and by far the most fun and memorable. Im already ready for next years 35C!!