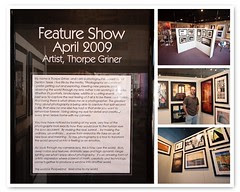 Art Gallery Showing
Originally uploaded by Thorpeland
For those that could not make it up to Oxide Gallery on April 7th for the shows opening, here's a little recap. In early January I took three of my framed pieces to an artist open call at the gallery. About a month later I was notified the judges enjoyed my work and wanted to include me in the March-April-May show. This was great news! Id never done anything like that, so it would be cool to be involved.

So, I attended the gallery show opening on March 7th, showing my 3 pieces along with about 25 other local artists. We had a big turn out and it was a blast. It was shortly after that, the owner of the gallery contacted me to say he had a new offer he wanted to know if i would be interested in. I called him back and we met at the gallery one evening to discuss what he wanted to tell me. He said there had been a lot of attention on my 3 pieces and he wanted to know if I would like to be the featured artist for the month of April. Wow.. thats was pretty cool. Then he told me I would need to have 20 to 25 pieces framed and printed. Ouch. That could get expensive! On the 3 I already had in the current show, I had spend between $140 to $170 getting framed and matted with really nice frames. Warren then gave me a crash course on framing on the cheap. And once i talked to the custom framers, I realized I was able to cut my framing costs literally in half (or more) by just going with a basic off white matte and brushed metal frame. And they still looked great. Granted, framing 20 pieces of various size still ended up costing a chunk of $dough$. But I saw this as an investment. What doesn't sell in this show can be used anywhere use in the future. And believe me, Im already brewing some future ideas. So, its considered "inventory" I guess.

Ok so April 7th rolls around and I was the "Featured Artist" of the evening. It was a really cool feeling. All the artists had name tags on so visitors could ask questions and hear from each artist personally about their work. This worked out well, as many people who were interested in my work were able to hear a bit about how I created what was hanging up in the show. Although I didn't want to give away too many secrets. haha This face to face PR must have helped. To the date of this posting I've sold 4 pieces from the show. Very exciting for me!

All of my work remains up for the full month of April. Then, a new featured artist will get the center display area for the May show. And my 3 pieces return to a place on the outside gallery walls. So the pictures in this post are for my memories of all my work hanging in the main show.

Be sure to check out www.oxidegallery.com to see info on their latest show, or to sign up for gallery updates.... or to be notified of the next Open Artist Call!
Posted by Thorpeland at 4/12/2009 03:23:00 PM