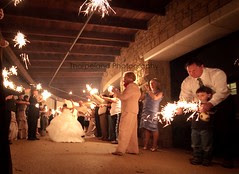 Wedding Bells!
Originally uploaded by Thorpeland
On the rare occasion I do take on a wedding photo shoot, I try to look for some type of creative scene or angle. Well this past Saturday evening I helped my sister shoot a wedding she had signed on for a few months back. It was my first time operating as the "2nd shooter" as its called. But I did enjoy it, as it let me roam around getting the other shots of interest while she worked on taking all the groups portraits. Which is actually the real meat of a wedding event.

The scene captured here was at the end of the night. All the guests lined the outside hallway leading to the parking lot, holding sparklers and the bride and groom ran through them together. I knew this would be a perfect opportunity for a wide angle shot. There was just so much going on in the scene i wanted to capture. The only problem would be I had pretty much one shot at this, no redo's!

I managed to get off 3 or 4 shots. Only 2 of which came out satisfactory for use. Not too bad. But this one was my favorite. So much happening in this one scene. I caught all the guests laughing and waving and cheering, the groom running out of the scene quickly and the boy and his father on the far right playing with their sparkler. To me, all things which make for an interesting shot of the night!

I think the bride and groom will be happy with the shots my sister Macey and I captured. Overall we got some really nice photo's of the evening and really captured their 'big day'.
Posted by Thorpeland at 4/21/2009 09:26:00 AM