People In My Life - Portrait #8 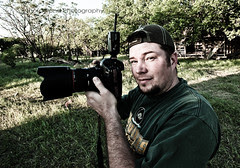 People In My Life - Portrait #8
Originally uploaded by Thorpeland
Just when folks started to think I had forgotten about my People in my Life project, I throw one in there! So, as the text under the photo says... this my buddy Rocky. Rocky came across one of my motocross action shots on flickr and wrote me saying he was interested in shooting some race shots in the future as well. I checked out his flickr stream and profile and could see he was also a serious photographer. So I wrote him back inviting him out on to the next race. He replied back a few days later and then joined my Denton Area Photographers Flickr group. It wasn't long before we were talking about techniques and our photography experiences and trading ideas. I even let him borrow one of my lenses for a big shoot he had lined up. I had only known him for a couple weeks, but I could tell he was a good guy and would take care of my equipment just as I would.

This past Wednesday has asked me what I had going on after work. Well I wasn't going to my usual soccer scrim because of my sore knee, so I told him I had no plans. He said he had nothing going on as well. That's when the idea to go on one of my photo drives came to mind. I normally go on them alone, getting lost on dirt back roads, walking through fields and stopping at ever run down building i can find. But hey why not take a buddy? So I asked him and he was all for it. I picked him up and we headed North out of Denton. It wasn't long before we found some interesting fields and later returned to an old abandoned farmstead I had found a few weeks back. I had forgotten how much fun it was to go shoot with someone else. As we roamed around the abandoned buildings, we exchanged shot ideas, setting information and shooting angles. This opened many new creative windows that I might have passed up before.

So while out on this recent photo drive it hit me that Rocky was worthy of my #8 Portrait. I snapped this one with my 10mm wide angle as he was shooting an old work shed. The device mounted on top of his Canon 1D MkIII is called a Pocket Wizard. Its used to trigger a remote flash, which he had setup inside the shed. As soon as I saw the shot i had taken, i knew that was the photo to use as his portrait.

Thanks Thorpe.. glad to beable to help when I can and to participate in your project.