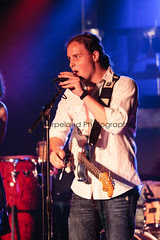 Backside Pick Lead Singer
Originally uploaded by Thorpeland
After shooting the Tennessee Three over at Boiler Room, I threw my camera gear back over my shoulder, sprinted up the stairs and ran one block over to Haileys Bar. Performing at their CD release party there was Backside Pick. I got in the front door and through the line of people and ran immediately into lead singer Rocky Ottely (pictured). I guess he knew i was there shooting for mydentonmusic.com and introduced himself. Not only was he a very talented singer but a genuinely nice guy. He didn't even complain when it took me what seemed like 30 minutes to dig my buried biz card out of my camera bag. haha Rocky took the stage with the band a short time later and immediately got the crowd fired up and moved in close to the stage. Backside Picks music was kind of a rock/funk/jazz type mix. Well, thats coming from me... someone who's no music expert. But, it was really good stuff and a fun atmosphere to be in. Similar to the previous band, they were also a fun shoot and the mostly college aged crowed seemed to know the songs and was really into it.

Id definitely go to see them play again if they returned to Denton. Sometimes its hard to really get into the music when im focused on shooting photo's. So it would be nice to have a second listen to them.
Posted by Thorpeland at 5/14/2009 02:43:00 PM