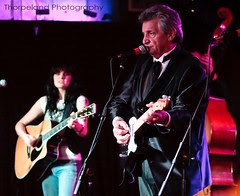 Performing Classics
Originally uploaded by Thorpeland
If you're a fan of Johnny Cash you NEED to catch a show by the group Tennessee Three. I had the pleasure of shooting some live show shots last Friday night over at the Boiler Room in Denton Texas. They were in town for one show and had a pretty good turn out in the small club. The Johnny Cash songs they performed sounded as if it was the man himself. Not to mention the lead singer, who I believe was actually a part of Johnny Cash's original band, looked the part of Cash himself. It was a fun event to shoot. The crowd was really into it and the band appeared to really enjoy performing. I hope they come back to Denton again some time.

Again it was the wonderful 70mm-200mm f/2.8 lens which shined for shooting in this dark stage lighting. I can't say enough about this lens and how it continues to impress me. Expensive? Yes. Worth every penny? Indeed!
Posted by Thorpeland at 5/14/2009 02:26:00 PM