Me and the Cub 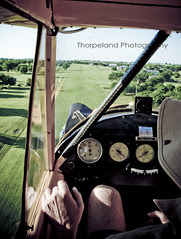 Landing Approach
Originally uploaded by Thorpeland
This past Sunday I had the unique opportunity to attend a local private "Fly-In" event. One of Emily's friends, who is an airline pilot, invited us out to their neighborhood for this little get together and the chance to photograph all the great aircraft. You didn't have to ask me twice! We arrived at the airfield at about 4pm and were quickly introduced to many others who had aircraft at the event. This is an interesting neighborhood, made up of pilots. So practically every house has a small airplane. And rather than having a neighborhood swimming pool, they have a 3000 foot grass airstrip. How cool is that!?

I immediately set out, shooting various angles and features on the planes. So many bright colors. So much to see. I was in photographers heaven! Then Emily's friends husband asked if I would like to go up in his Piper Cub. Sure!! Was all I could say! We squeezed into the small aircraft and taxied down the runway. I was very interested to experience this flight in this aircraft because Id recently been doing a basic pilot training in Microsoft Flight Sim and I wanted to see how it compared to the real deal! (I know, you're laughing)

Well, we reached the end of the runway, turned facing upwind and went full throttle. Just like the flight sim, 40 mph and we were lifting off the ground and headed upward! What a cool feeling! We began circling the surrounding farmland where he pointed out various landmarks and points of interest. We flew around for about 30 minutes while I snapped pics constantly. It was surprisingly like the flight sim, with the exception I was just a passenger..... and it was a real aircraft. :-) With both side windows down, the cool evening spring air poured in, but I was having too much fun to care. Also having the windows down made it easy for me to move my camera around for the best shot.

Finally it was time to land. He circled around to the end of the runway to what seemed like too high of an angle compared to the end of the runway, to me at least. Then again, im not the pilot with 20+ years of flight experience, like the guy sitting just in front of me! But without hesitation, we dropped down quickly, flared up a bit and drifted smoothly onto the runway. The Piper Cub is such a small maneuverable air craft, it doesn't need much runway to take off and land. Nothing to it.

We taxied back to the hanger and headed in for one more bite to eat before driving home. Really a fun day and a first for me! An afternoon I'll never forget.
Posted by Thorpeland at 5/17/2009 11:29:00 PM

Just stopping by to introduce myself and inform you and your readers about an awesome photo contest.

That's too cool! I love to fly, especially low in and slow in small aircraft. I know you had a great time!