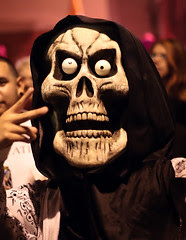 Friendly Skull Dude
Originally uploaded by Thorpeland
There are few places I could go which would fit that title. In this case it was the Oak Lawn Halloween Block Party! If you're into people watching, this was THE place to be. I would have to guess there were at least 10,000 people packed into a 6 city block radius. In the epicenter of this mass of humanity was the center attraction... the runway. On the Runway, participants line up and take turns having their character introduced to the jam packed crowd on each side of the barriers as they make the walk down the path. The crowd in this area is crushing to say the least. It wasn't easy to move even a few feet and trying to do it while wearing camera gear was that much more difficult!

While at the block party I think I saw every type of costume there possibly could be. And even some of the most creative ones id never thought of. It was my first time this event. Id been invited a few times in the past but never made it. I'll definitely have to go again next year. Big thanks to Craig and Bex for the invite. It was a blast.