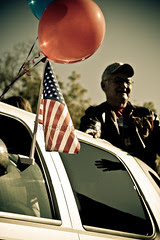 It's a Parade!
Originally uploaded by Thorpeland
On Saturday October 17th I headed up to Whiteboro Texas to catch the annual Peanut Festival. This small North Texas town has held this even for something like 70 years (from what im told). It had been about 10 years since I had been and I had a free Saturday, so I packed up the camera gear and drove north.

I was surprised to see how much the festival had grown since my last visit. Back when I last attended, the booths' filled Main Street and that was really about it. Fast forward 10 years and the festival now fills Main Street and extends 2 street deep on each side. Not to mention the crowd, it seems, has about tripled! But this was a good thing for me as a photographer. With the parade, the old west gun fighters show and plenty of people to observer and take pictures of, I knew it would be a good time.

I started out the morning by taking my spot on the parade route on Main Street. I had to really jostle for position with a bunch of cub scouts, but I found a spot! As the parade vehicles rolled by, I was able to get a number of really fun shots. The photo in this post was one I really felt captured the day. An old war vet riding in the back of a pick-up truck waving to the crowd. The Peanut Festival and Whitesboro are really classic Americana and this parade showed it. I think if anyone from another country was to be visiting here and attend this parade they would be thinking "this is what I picture when I think of small town USA".

After the parade I walked up the street a bit and found my seat again for the Old West Gun Fight. It was really entertaining to watch the 6 actors dressed in the old west theme act out a dispute, settled with riffles and revolvers. Ah.. America!! ;-) Watching the reaction of the people in the crowd as the guns went off was almost as interesting as the gun fight itself.

I continued to walk the street after the fun fight and found myself infront of Eye of the Storm Photography. It had been so long since Id last been to Whitesboro, I didn't even realize someone had opened a photo studio right on Main street! That someone turned out to be a friendly fellow photog named Mike (I can't remember his last name!). We immediately started talking shop as he showed me around his studio. It was a real treat that I didn't expect to find up in "the boro". Mike's a super nice guy and a great photog, so if you're ever up in the Whitesboro Texas area, stop in and say hi.

I left the festival around 2pm with a memory card full of photos. I had a pretty good time, better than I thought Id have. I may just have to venture up there for no real reason at all. There's some great photo opportunities!
Posted by Thorpeland at 10/30/2009 08:53:00 PM